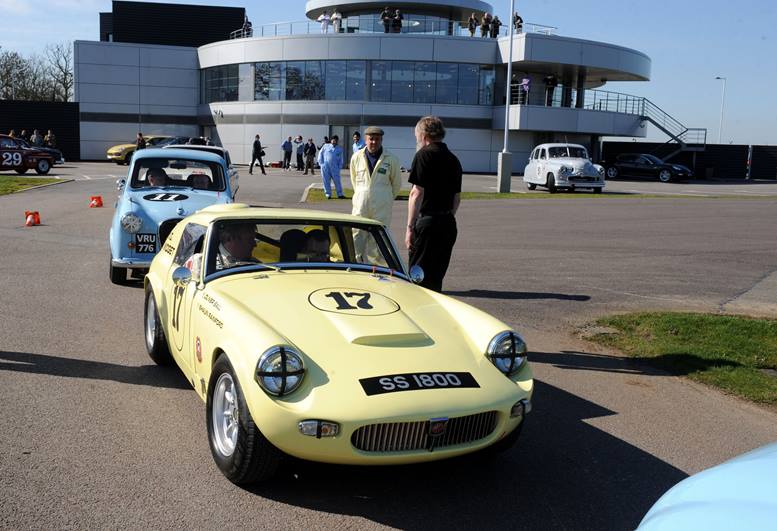 A 1960 MG Midget with an aero GT body. An Austin A35 saloon is seen in the background.

By: By Paul Hardiman

It’s the latest from the fertile imagination of Julius Thurgood, the man behind “Top Hat, Cloth Cap,” “Stars of the ’70s” and many more inspirational racing programs.

Thurgood wants to turn back the clock to the good old days, recapturing the camaraderie of a merry racing band. So he’s created the Historic Racing Drivers Club to run a five-race series in 2011 and maybe more in the future.

So expect “organised pandemonium” in “fantastic, improbable cars among the pre-’60 saloons. When you include the tiddler Grand Touring Greats class for baby GTs, they had enough interest to fill two grids at Brands Hatch on April 9.

Intrepid pilots ran a Standard Vanguard, a straight-six Ford Falcon, Volvo PV544, MGA and various A35s and A40s. Three lady racers signed up, including Victoria Beever in a Rover P4, though there’s not much “Auntie” about this one. Well-known historic racer Richard Postins, shaking down Mike Haigh’s Falcon, explained: “It’s competitive, but it’s also about having a good time  –  and the cars slide about a bit.”

The two categories, each running in their own race, were Touring Greats for pre-1960 touring cars in various classes (incorporating XKteers), and a Thurgood favourite, Grand Touring Greats, sub-1500cc special-bodied GT cars such as Mini Marcos and Lenham and Ashley Sprites, which includes the A-series Challenge. All cars run on Dunlop historic racing tyres, for less grip and more spectacle.

Why is it so popular? Part of it is that there’s no championship fee to pay, and the events are reasonably priced: “With a 30-minute race plus 15 minutes practice at a club meeting costing £295 with no VAT, we estimate that an HRDC race competitor can expect to save at least £1,000 a year in a five-race series,” said Thurgood.

“A 45-minute race with 25 minutes of practice is currently priced at £350, though entry fees will be higher at events such as MG Live or the televised event at Mallory on May 30, as the higher track fees are passed on from the circuit organisers to the visiting clubs,” he said.

A group of sponsors pay for the administration, general running costs, non-racing events and publicity, and therefore the HRDC only has to fund the actual track time via competitors’ entry fees.

“We came up with this at the request of competitors,” said Thurgood. “There’s great camaraderie, and that spirit has been watered down in historic racing in recent years.”

HRDC sponsors include Rae Davis Racing, Classic Cars of Kent, West Riding Jaguar, IK Classics, Classic & Modern Engine Services and the Principle Group. Serious interest was shown in the HRDC’s March 19 press day at the Porsche Experience, Silverstone, by the presence of Gary Wassell, Car Motorsport Manager of Dunlop, on whose tyres the cars all run.

2011 HRDC Dates
(Each event has a race for each category, unless noted)
May 30: Mallory
June 24-26 MG Live: Silverstone
July 30: Thruxton (only Touring Greats)
October 1: Snetterton
More at www.hrdc.eu