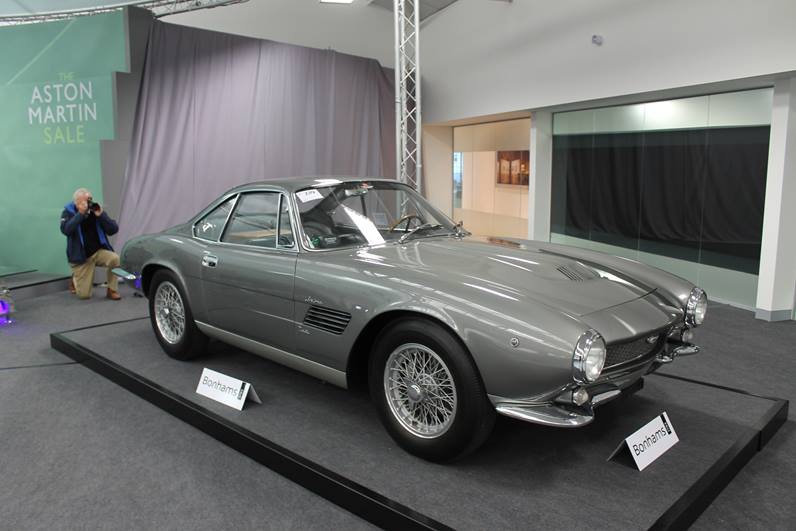 The sole DB4GT Bertone "Jet" coupe is the most expensive Aston Martin road car ever sold, at £3.25 million.

Bullish prices paid for Aston Martins at the annual Bonhams AML auction in May confirmed an upward trend in Aston values in the marque’s centenary year. The 14th such sale to be held at the rebranded ‘Aston Martin Works’ restoration workshops and heritage centre, on the site of the former Newport Pagnell factory, inspired the highest live attendance yet, and broke all previous records.

The £3.25m with premium invested by an Irish buyer in the 1960 DB4GT ‘Jet’ Coupe by Bertone is the highest price ever paid for an Aston Martin road car, while the £10.07m sale total with 100% of cars selling were also record stats for this auction.

Every last barn find dropping was eagerly swept up, led by a 1964 DB5 that had been in deceased ownership since 1972 and was last MOT’d in 1979. It was taken on for £320,700, more than double the pre-sale estimate, and more than another previously restored DB5 of identical spec and vintage with valid MOT in the sale which sold for £303,900!

Even a 1965 DB5 Aston Engineering detailed minter appeared to have been inexpensively landed for £460,700, by comparison. And yet, despite being uneconomic prospects, in terms of what they might cost to revive and what a benefactor may expect to recover on subsequent resale, even the most apparently hopeless basket cases continue to pull. Clearly, there’s more than one Professor Henry Higgins out there, who wants to turn Eliza Doolittle into ‘My Fair Lady’.

Among other discoveries in Bonhams ‘Barn Finds’ corner at the Aston Sale (which even warranted a photo-mural set as a backdrop this year) were a largely complete 1964 DB5 with seized engine, which found £259,100; a 1963 DB4 Series V Vantage with last tax disc expired in 1985 that made £180,700, and a really down and virtually out 1966 DB6 Vantage with a cat’s skeleton in the back that raised £107,900 and much applause. One hopes the winning bidder has a sense of humour.

[Editor’s Note: 'The Fangio 1954 Mercedes-Benz W196R realising £19,601,500during the Bonhams 12 July Goodwood Festival of Speed sale has convincingly overtaken the RM Ferrari result — a full analysis of the significance of what is a new world record price for any collector vehicle will appear in next month's European auctions round-up.]

The 340/375 MM smashed the previous auction record for the model and established a new world record for a closed ‘Berlinetta’ Ferrari sold under the gavel. It is also the most expensive automobile sold at auction during the 2012/2013 Transatlantic auction season so far. Five cars realised more than 1 million euros apiece here and all 16 Ferraris sold out.

For although a 1962 400 Superamerica Short-Wheelbase Coupe ‘Aerodynamico’ achieved a 2.18m euros (£1.86m) mid-estimate result, more significant for the Prancing Horse market was the 1.1m euros (£952,000) paid for a 1965 275GTB, which had been guide-priced to fetch 750,000-850,000 euros. Originally a short-nosed car, then long-nosed during an earlier rebuild, 07743’s more than top estimate valuation was certainly boosted by a recent return to short-nose configuration during the latest restoration, the fact that all numbers were still matching and the car being in fresh receipt of Ferrari Classiche Certificazione.

Consumers are usually only cajoled into play by ‘No Reserve’ offers in a market where bears have chased away the bulls, and yet, 60% of the voitures viewed in the underground car park beneath Artcurial HQ in Paris were auctioned ‘Sans Reserve’. Among them, surprisingly, the highest and second highest priced sellers, a 1939 Horch 853A Cabrio and a 1938 Bugatti Type 57 Ventoux from the collection of Carroserie Lecoq, the restorer Andre Lecoq. They were hammered away in the Theatre du Rond-Point for 666,900 euros (£566,865) and 508,950 euros (£432,608). By the end of a close-to-five-hours marathon evening, 81 of the 91 cars had sold, a decidedly bullish 89% sale rate, for 8.66m euros (£7.36m).

More than 20 ‘No Reserve’ lots certainly magnetised plenty of punters to spend their Saturday afternoon in the former Mercedes-Benz dealership showroom just outside Woodstock that is the Bonhams Oxford saleroom these days. Once again, there were plenty of takers for 91% of the 76 cars and 79% of the 38 bikes in exchange for £1.51m with premium. Making blips on many radar screen here was a right-hand drive 1972 Porsche 911T 2.4 Coupe with the last MOT out of time in 1997, so needing full re-commissioning if not considerably more and an ideal candidate for 911RS 2.7 conversion. It was keenly contested until hammer fall at £48,300 with premium, three times more than the lower estimate.