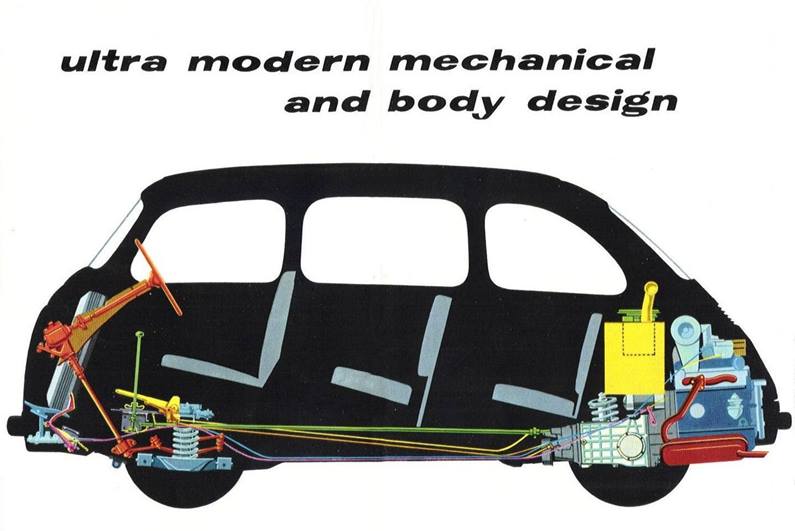 THE FIAT 600 MULTIPLA- THE ORIGINAL MPV

Nigel Matthews looks at the Fiat 600 Multipla, a small car that offered seating for four to six passengers, with different cargo configurations.

It is widely believed that Chrysler invented the MPV, but actually Fiat beat them to it by at least 28 years. Following the Second World War, Fiat management decided that Italy and the World needed a small, cheap-to-build and easy-to-purchase people mover.

Fiat was no stranger to building small cars. The cute and lovable Fiat 500 Topolino, built between 1936 and 1954, was one of the best-loved small cars of all time. Its replacement, the Fiat 600 was launched at the 1955 Geneva Motor Show. This small rear-engine car was powered by a 22-horsepower 633-cubic centimetre engine, and its body had two doors and was capable of carrying four adults in reasonable comfort.

In 1956, a version known as the Multipla was launched- basically a stretched version of the car with two front ‘suicide’ doors and two back doors that allowed a number of seating and cargo configurations. The 4/5-seater version was fitted with two bench seats that folded flat into a bed, whereas the six-seater had a front bench seat and four individual seats that folded completely flat into the floor making it a great cargo van.

There was also a taxi version fitted with a single driver’s seat. It had a luggage platform next to the driver (similar to the old London Taxi cab), a folding middle bench seat and a fixed bench seat in the back. Other options included a full-length canvas sunroof, and list prices (1960) were shown ranging from 730,000 to 835,000 Lira (£8,400 to £9,600 today).

In 1960, the Multipla received a larger 767-cc engine producing an additional eight horsepower, although some (particularly taxis) were retro-fitted with the 903 Abarth unit or the Simca 1100, the latter mated to its five-speed gearbox.

During the 13-year production run 2.7 million units were produced. Now hard to find in the UK, the Hagerty Price Guide shows that the 600 Multipla demands a premium over all other 600 models (with the exception of the Jolly variants), even out-performing the 600 Vignale Spider. According to Fiat restoration specialist Kelvyn Baker of Latifa Estates, they are relatively easy to work on, but some parts can be hard to find. “Any of the standard 600 parts are widely available,” he says. “It’s the specific parts that are hard and expensive to source. For example, a new original door could cost you over £1,000.”

In 1998, Fiat decided to revive the Multipla name, and the Type 186 Fiat Multipla was born. Unfortunately this model had none of the outward charm of the original, and it was voted by the Telegraph newspaper as second in a list of the 100 ugliest vehicles ever produced.  Jeremy Clarkson famously said that it looked “bonkers” but both he and Richard Hammond were very complimentary about the ingenious use of the interior space allowing six adults to be transported in comfort. Will the ‘new’ Multipla, which was last sold new in 2010 become a classic? With its unique styling, it probably will. If you’ve got one, maybe you’d like to tuck it away for a few years!