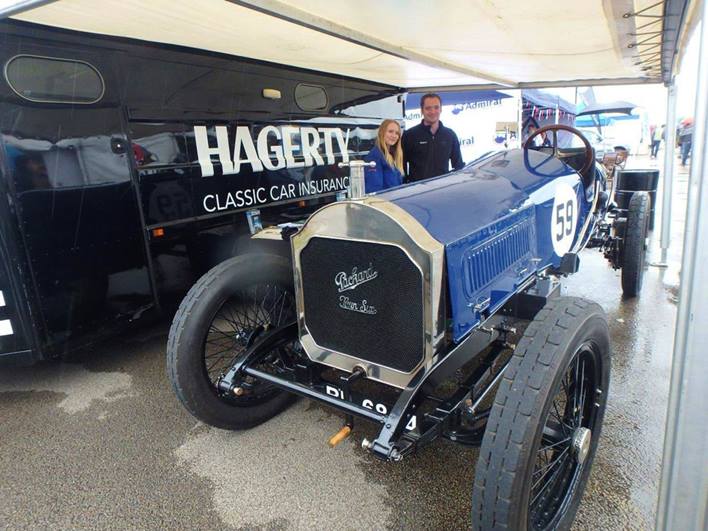 The Packard Twin Six Typhoon at the Silverstone Classic, with Ian and Anya.

If you ask any motoring enthusiast what the name Dennis calls to mind, and you are likely to get the responses ‘fire engine’, ‘lorry’ or even ‘Churchill tank’. You are unlikely to hear ‘veteran American land-speed record holder’. That is, unless you spoke to John Dennis at the Hagerty stand at this year’s Silverstone Classic and saw his stunning 1916 Packard Twin Six Typhoon.

But John Dennis is indeed part of the great Guildford motoring dynasty that so famously built a wide range of utility vehicles. The grandson of one of the original founding brothers, he established John Dennis Coachbuilders in 1985, a company that still flourishes today. John has since retired, and in the last few years has dedicated his time to rebuilding his Packard- a car that was almost scrapped due to a terrible fire in 1992.

In the early 1900s, Packard was a significant force in American motor manufacturing. From 1911, their cars featured a huge 6.8 litre (450 cu in) six-cylinder, but chief engineer Jesse Vincent felt that a 12-cylinder, 60 degree V-12 would be smoother and deliver more torque. The resulting Twin Six engine was fitted to an experimental body (known as the Typhoon), and at the Sheepshead Bay Speedway in 1915, the car set a new land-speed record of 103.5 mph. The following year the Twin Six, in a variety of body styles, was sold to the public, and by 1923, over 35,000 had been produced.

Dennis’s Twin Six was first owned by an Australian, and was originally fitted with a ‘tower’ body. By the 1980s, it had found its way to the UK, and at some point- believed to be 1992, due to a scorched tax disc found in the wreckage- suffered a catastrophic fire. In this state, Dennis purchased what was left and set about rebuilding the car, deciding to re-create the Typhoon body.

“I based the design on photographs of the original,” Dennis tells me. “It was a Spartan thing: I have maybe changed it a little to make it more aesthetically pleasing.”

Despite the fire, the engine was still in remarkably good shape. “Very little work needed doing to the engine- we ground in the valves, cleaned it up, and it all went back together very well.”

The result of Dennis’s work is superb. With the top of the bonnet standing almost shoulder-height, the car is a huge beast. The cockpit is sparse, but what is there is stunning: the usual veteran mix of wood, brass and leather providing a tactile mix of elements. Once the louvred bonnet is opened, the massive 6950cc, 3” bore, 5” stroke engine is exposed; a thing of beauty, the chrome-plated parts shimmering even on a soggy Silverstone day.

Since its rebirth, Dennis has used the car extensively, and it can be regularly seen at events such as those at Beaulieu, Prescott and the Brooklands Double Twelve. And Dennis keeps busy too, telling me he’s looking forward to his next big event- the London to Brighton Veteran Car Run. “I know the Packard is too young for the ‘Run” he says, “but I’m hoping the Veteran Car club will accept it into their fold.”

Whatever its future, without John Dennis’s perseverance, this spectacular old machine would have certainly been lost forever. We salute him for saving it.