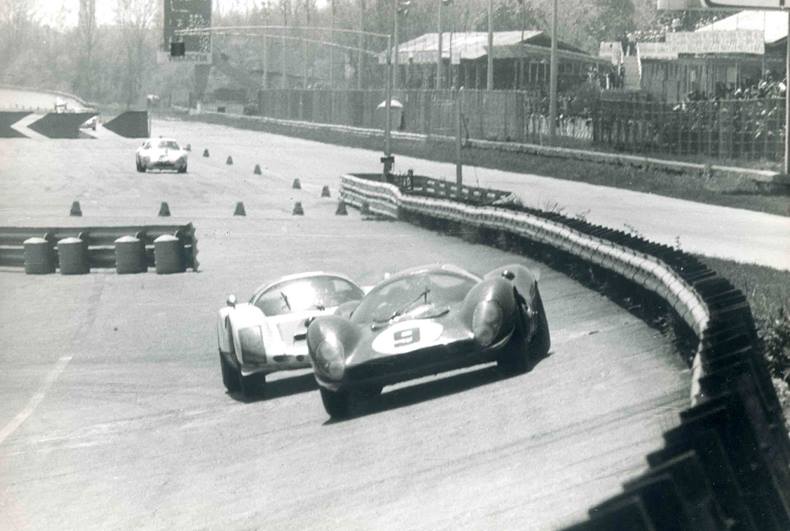 Monza is a destination on many a petrolhead’s bucket list, and for good reason. Whether you remember the epic battles between Moss, Fangio, Collins and Behra in the 1950s, or Michael Schumacher’s five wins in front of the cheering Tifosi, the Autodromo Nazionale Monza is synonymous with Italian motor racing.

Today, Monza is outwardly similar to many of the other old F1 circuits. The pits are ultra-modern, flanked by gleaming glass tower blocks housing the press centre, race control and VIP boxes. The track is clean and efficient: all brightly-coloured kerbs and catch-fencing. On non- race days the circuit and grandstands are free to enter, and are dotted with sightseers and amateur photographers. Even with a few Ferrari Challenge cars out testing on the track, the place has a sense of calm about it.

Most visitors to Monza go no further than the information centre, the museum and the stands. But look a little harder and the history of this great circuit is everywhere, and that history is anything but calm. Monza is one of the fastest circuits in the world- a place that claimed the lives of some of F1’s greatest: Ascari, von Trips, Rindt and Peterson are among the 52 drivers and 35 spectators who have met their end here. And not far beyond the chrome and glass of today’s racing, still lie the remains of a very different era.

To find the real Monza, you have to go a little off the beaten track. From the information centre you must head north, pushing past a barrier and walking on an apparently disused road that passes under the ‘Junior’ circuit. You quickly find yourself in a forest- one full of octane-fuelled monsters, roaring just out of sight behind the trees. As you press on, suddenly you see a huge white wall through a gap in the foliage. As you get closer, you realise it’s not a wall but part of a huge banked concrete track, the high-speed circuit that was last used in competitive racing in 1969. There’s another fence shielding the old track, but there are plenty of gaps through which you can squeeze, allowing you to step onto the world’s third-oldest banked track (after Brooklands and Indianapolis). Then on hands and knees you climb to the top, marvelling at the courage of the drivers who once lapped this 2.6-mile circuit in under a minute.

The high-speed track is often called the ‘old circuit’ but in reality it was built at the same time as the Formula 1 track. Both were the brainchild of Arturo Mercanti, a war hero, pilot and director of the Automobile Club of Milan from 1919. In 1921 he organised the first Italian Grand Prix at Montichiari (Brescia), but he quickly formulated an idea for a new, purpose built motor circuit in the grounds of the Monza Royal Palace. Engineer Piero Puricelli was commissioned to build the new track, starting on May 15th 1922 and finishing an astonishingly-quick 110 days later.

The high-speed track was a simple oval, but designed to link to the F1 circuit, allowing both to be used together if required. The curves were, in the early days, conservatively banked at about 20%, but in 1955 they were rebuilt with banking at just under 40 degrees- equivalent to an 80% gradient. Until you climb up them, it’s hard to get a feeling for just how steep the banks are. In fact, going up is not too hard- coming down, especially if you have a camera in one hand, is the difficult bit.

Today the high-speed banking is cracking in places as tree roots and the elements have taken their toll over the years. It’s rarely used now for vehicles- the Monza Rally Show in November and a few promotional events are the only times the banking feels the rumble of car engines. At other times it is the tranquil refuge of runners and cyclists, a world away from the racing that was captured in the 1966 film Grand Prix (see an excerpt here.)

But the high-speed circuit is not the only element of Monza’s history that survives. Elsewhere in the woods is another overgrown track that winds its way through the trees. It is paved with bricks, which on close inspection vary in size and design. This was the Pirelli test track, a circuit used to test tyres on a wide variety of road surfaces. Further exploration uncovers an ornate gateway- the Serraglio-that once formed the entrance to the Royal Deer Park, and today gives its name to the minor curve between Lesmo and the Ascari chicane. Even the staff car park has secrets- its elaborate brick pavement is all that remains of the original track surface, and the car park itself stands in front of single-storey offices that once housed the paddock.

It is this combination of the old and the new- layers of motor racing history overlaid on each other- that makes Monza special. Along with the other old circuits like Spa, Silverstone, Monaco and Hockenheim, the place is a million miles away from the new sanitised F1 circuits of Asia and the Far East. Long may it remain one of the jewels in the crown of the Formula 1 calendar.

Monza is free to enter except on race days when charges apply. Tours are available, with the option of a lap of the circuit (in a minbus!) unless racing is taking place. Monza is situated on the outskirts of Milan, Italy. For more information, visit the Monza website: https://www.monzanet.it/en/