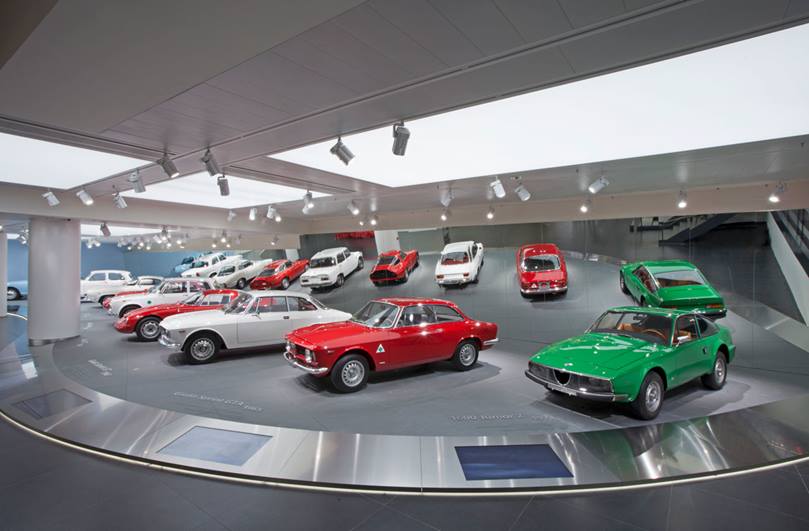 A Pilgrimage to Arese

I like a lot of different classic cars. In general, I think Porsches are great, especially (don’t hate me) the ones with an engine up front. I love my VW Type 2 bay window camper, I have a huge soft spot for Jensen Interceptors and I think pre-war sports cars are some of the most magical mechanical beasts ever created. But my heart belongs to only one marque: Alfa Romeo.

A few years ago, my girlfriend (now wife) arranged for us to fly to Milan over the weekend of my birthday so that we could visit the Alfa Romeo museum at Arese together. It was an amazingly romantic gesture, but in reality it was a disaster. We arrived in the middle of a Milanese transport strike, combined with a deluge that Noah would have been proud of. A taxi driver took us from the airport to our hotel, helpfully avoiding the worst of the flooding but seemingly quadrupling our bill in the process.

The next morning, we spent another fortune in a taxi that took us to Arese, the legendary home of Alfa Romeo and the site of the Museo Storico Alfa Romeo. We were dropped off by a small gatehouse, where the gate guard told us the museum was shut. “When will it open?” we asked, expecting a bit of a wait as it was quite early in the morning. “In a year and an ‘arf” he replied. We went pretty much straight back to the airport and flew home.

This Easter, I got the chance to set the record straight. I was travelling close to Milan on business and decided to make the pilgrimage once again to Arese. I’m glad I did.

After checking the website to make absolutely sure the museum was open, we set off from our hotel near Monza. The gatehouse and security guard were still there, but past them was a slightly nondescript office building with what looked like a huge red water slide attached to one side and the Alfa Romeo logo on the roof. Another great red canopy guides you from the car park to the entrance.

The Museum’s redesign was controlled by architect Benedetto Camarana, who in 2013 was asked by Sergio Marchionne to take charge of the redesign. He had to make use of the original 1960s building, but create a contemporary museum that captured the Alfa Romeo brand identity. The ‘water slide’ was a key part of this transformation, as he stated: “I made no use of camouflage in the language of the work. I used the “new” Alfa Romeo red… as a result there are innovative features which serve to show the timelessness of [Alfa Romeo].”

Inside, the museum is ultra-modern, all clean shining surfaces and interactive displays. Just past the entry turnstile, it is no accident that the first room has racing cars on one side, and a journey through the Alfa Romeo logos on the other. These, after all, are the two elements at the heart of this company.

From here, you are led along a twisting pathway through Alfa’s history. The cars are arranged in three areas: the ‘Timeline’ showing production models, ‘Bellezza/ Design’ showing the development of aesthetic and engineering design, and ‘Velocita/ Technica’ focusing on racing.

The Timeline cars were interesting- everything from the first 1910 A.L.F.A. 24hp to the 1987 Alfa 164 with the glorious Busso 3.0i V6 engine. But as I looked at these wonderful cars, all I wanted to do was move on to the other two areas.

I wasn’t disappointed. In ‘Bellezza’ I found the most wonderful collection of prototype Alfa Romeos. I have been lucky enough to visit Corrado Lopresto’s superb prototype collection, and I thought he had a monopoly on exotic Alfa one- offs. He doesn’t- it seems the company kept quite a few for themselves.

For me, the stand-out car was Pininfarina’s 1969 Speciale, based on the Alfa 33/2 racer. It was the development of a 1968 design, that of the Geneva Motor Show Ferrari 250 P5 show car. The result is a gull-winged masterpiece- a sublime Berlinetta, with flowing lines that retained the poise of the original. It is hard to better the design of Alfa’s own T33 Stradale, their take on a road-going version of this Targa Florio- winning racing car, but Pininfarina’s Speciale does just that.

Further along, Alfa introduces the ‘Italian School’ of design. Here we meet the stunning Alfa pre-war 8- and 6- cylinder cars. The older I get, the more I love these powerful-yet-stately cars. Everything about them is sublime, from the sloping front grille and headlamps to the exquisite casting of the engine blocks.

Finally, we enter ‘Velocita’- the reason for Alfa’s existence. An entire hall is devoted to Alfa’s legendary front-engine racing cars that dominated motorsport from the 1920s to the 1950s. Vittorio Jano’s 1925 Grand Prix Tipo P2 is here, which he was commissioned to design by Nicola Romeo with the instruction to “make us look good”. He did just that- from the 1924 European Grand Prix in Lyons until the rules changed in 1926, it was almost unbeatable.

Also here is the 1950 Alfa Romeo GP Tipo 158 Alfetta. The 158 had an interesting birth, with an early version having to be hidden under a woodpile at the outbreak of war. After the conflict was over, the design was modernised until in 1950, with the amazing team of Fangio, Farina and Fagioli driving, the car took to the track with 350hp and a top speed of 180mph. As Guiseppe Busso put it, “the main problem was deciding which of the three drivers should win.” From its debut at the Silverstone GP, the 158 Alfetta remained unbeaten and occupied the top three places. It won six of the seven official F1 races and five other non- championship competitions. At the end of the season, Giuseppe ‘Nino’ Farina was the first Wold Champion of the new F1 series.

There is much more to the Museo Storico Alfa Romeo than can be conveyed in such a short article. But from early aero engines to the touring cars of the 1990s, there is a common thread running through the museum: passion. This is where Camarana’s design suddenly makes sense- his blood-red additions to the original building run through it like a vein, linking all elements of what is Alfa Romeo’s heart- the Cuore Sportivo. The Arese museum captures this ethos perfectly- what a great celebration of Alfa Romeo, one of the most emotive brands in automobile manufacturing.