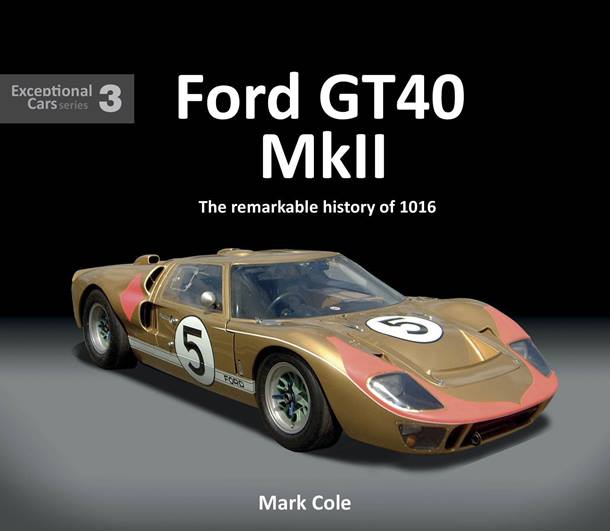 It’s rare a car is offered at auction with a copy of a book detailing its history, but then Ford GT40 Mk II chassis number P/1016 is no ordinary classic car. Sold this August in Monterey by RM Sotheby’s, the car cost the new owner $9.795m. The book, by Mark Cole, part of Porter Press’s Exceptional Cars series, costs a great deal less.

Henry Ford II’s attempt to buy Ferrari, the snub by Enzo Ferrari and subsequent Ford Le Mans programme is the stuff of legend. For two years, the Blue Oval cars had a flurry of DNFs at the Circuit de la Sarthe before finally in 1966, with the help of Carroll Shelby, it all came together. The result was the Ford GT40 1-2-3 finish that created one of motorsport’s most enduring images. The car that came in third was this: P/1016.

As usual, the Porter Press book is a mine of information, beautifully presented with numerous photographs both old and new. Author Mark Cole is perfectly placed, having commentated on the Le Mans 24 Hours for over three decades. He analyses the rivalry between Ford and Ferrari, charts the birth of the GT40, then follows the development of the car once Shelby was brought onboard, creating the winning 7-litre Mark II. The Le Mans campaign is described in detail with some wonderful period photographs.

The car’s wider racing history is also tracked: Daytona, Sebring, and then as a historic racer. After a crash at Elkhart Lake in 1996, the car underwent a total restoration, documented in the book, using the original GT40 chassis jigs. Since then the car has been seen on track and at various wold-class events including Goodwood and Pebble Beach, all of which are detailed. Short biographies of those characters involved in the design, development and driving of the car are also included.

It’s a fine book, especially if you’re a Le Mans or Ford enthusiast, and would make a great addition to any motoring library.