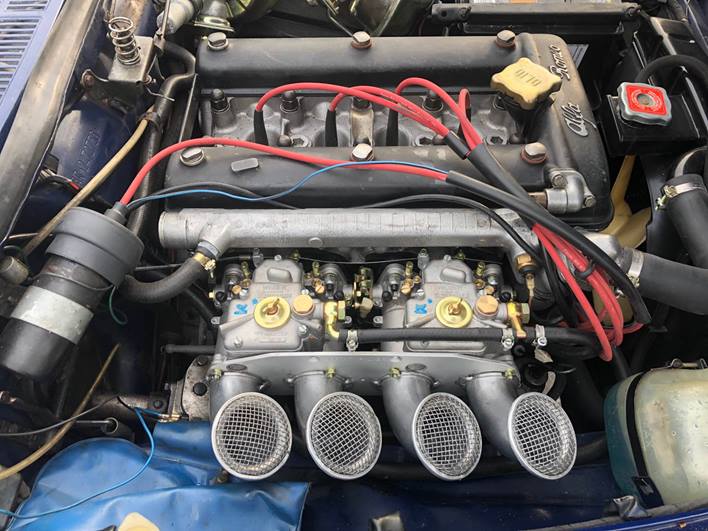 There comes a time in every classic owner’s life when he or she succumbs to the attraction of a carburettor upgrade. Whether it’s the draw of the Holley Double Pumper or the lure of a set of triple SUs, bigger, better and shinier carbs are like a bottle top to a magpie.

For me, it has always been the appeal of Webers for which, like many odd things in my life, I blame my childhood. When I was about 17, my best friend Paul fitted one to his Vauxhall Chevette. All my friends and I were in awe; we understood not what this thing did, but we knew it was Magick, like a secret potion that affords its imbiber the Strength of Ten Men. Maybe, in retrospect, we spent too long playing Dungeons & Dragons rather than talking to girls, but you get my point. I don’t recall whether the Weber carburettor actually improved the performance of the car much, but we all thought it did. The seed was planted.

Then, when I grew up, I started a series of long and sometimes troubling relationships with a variety of twin cam-powered Alfa Romeos, one that continues to this day. And thus, when the Alfa came equipped with a pair of Solex ADDHs, did I verily swap them for twin Weber DCOEs, and All Was Good.

A few months ago, I looked under the bonnet of my Alfa Spider, and knew it was time. The forty-three-year-old Solexes were looking pretty shabby, and although they made the engine run OK, there was a huge delay on acceleration that made the Brexit process look quick. They really needed a complete clean and rebuild. Or, I could just replace them with Webers…

The squat silver box of the Weber DCOE, with its butterfly-secured top cover is, for me, a snarling, petrol-scent-clad thing of beauty. I searched around online and found a new pair, made under license in Spain, for about £550 and bought them. I’d heard mixed reviews about their build quality but when they arrived they seemed OK, except all the jetting and linkages were wrong for my engine. A few pounds more on eBay and the correct jets, chokes and linkages were on their way.

Next, came the day of the change. I prepared my tools: an array of 10mm and 13mm sockets and spanners (including the essential stubby ones for those tight corners), my screwdrivers and a magnetic tool tray to keep all the parts in. My first job was disconnect the battery; on an Alfa Nord engine the starter motor is just below the carbs and if you touch a tool on the live terminal while the other end is resting against something steel, you end up welding yourself onto the car. Ask me how I know.

Secondly, I needed to disconnect the fuel pipe. I changed these relatively recently, making sure they were ethanol-resistant, so they came off pretty easily. To prevent spillages, I always plug the end with a clean M8 bolt and tape it upright out of the way. Next, I released the choke cable and again taped it away so it didn’t poke me in the eye later. Again, ask me how I know…

Then came the main event. The air cleaner came off relatively easily, its eight 10mm nuts mercifully un-seized, as did the accelerator linkage. Next, I started work on the four nuts that held the right-hand carb on to the inlet manifold.

To say it wasn’t easy is like saying Stalin was a bit of a pickle. Whilst Weber designed their carburettors so that a socket fits over the connecting nuts and there’s nothing preventing a ratchet shaft from reaching the said socket, it seems Solex took the opposite view. Even a ring spanner won’t fit; the only option is to move the nuts a few millimetres at a time using an open-ended wrench, which is fine (if annoyingly slow) for the top nuts, but the ones on the bottom, especially next to the now-inert starter motor, are not so simple. I had to bend over at an angle absolutely guaranteed to make my back spasm, my right arm hooked under the carb and my left squeezed so tightly under from the other side that I could only just touch and guide the spanner on with one finger. I found swearing helped. Nevertheless, I was kept going by the absolute certainty that by the end of the day the engine would be singing as sweetly as Katherine Jenkins with all the power of Dwayne Johnson.

Finally, the Solexes were off and with huge restraint I managed to stop myself from throwing them out of my driveway and across the road. Next, I lined up the Webers. The linkages on these twin-choke carbs mean that you need to mount both at once, which is not easy with eight bolts to line up. After a bit more fiddling (and swearing) they were on, and I set about the much simpler task of re-connecting the nuts. Within 30 minutes, the carbs were bolted on and ready to go. I filled the chambers with petrol, opened the choke, and turned the key… then went back and re-connected the battery. I turned the key again… and she fired up, pretty much first time!

So, did the Webers make all the difference? Yes and no. After some tinkering with the setup using a vacuum gauge, they’re definitely pulling better than the Solexes but they’re still coughing like a cat with a furball. I’ve just ordered a Colortune and I’m going to have a play with my jet collection to see if I can improve things. I’ll let you know how I get on.