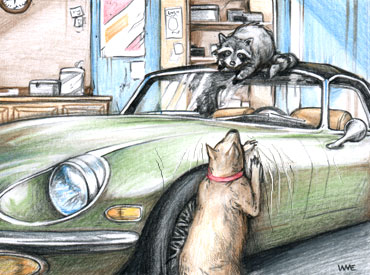 If you insist on making the garage a doghouse, find another home for your other pet – your collector car.

Losses and Lessons: Protecting your car from scratches

WHAT WENT WRONG: This car’s owner lived near an American wildlife preserve. One day the dog went into the garage through his doggy door and found a raccoon “bandit” already inside, stealing the dog’s food. A noisy fight followed. The frightened 30-pound raccoon headed for high ground: unfortunately the roof of the E-Type… An epic struggle between dog and raccoon ensued but the biggest casualty, however, was the Jaguar.

DAMAGE: Almost every panel on the car showed claw and scratch marks from the dog trying to get at the raccoon, and from the raccoon trying to fend him off.

LOSS: Most of the trim and lighting, and even some glass, had to be removed from the car for repairs. Ultimately it needed a complete repaint.

LESSON: Storage facilities need to be secure. If you insist on letting your dog use the garage like a doghouse, make sure he’s the only creature that can come and go. Luckily, any raccoon loose in England would probably be followed by a TV news crew, but a large feral cat can make nearly as much of a mess, especially as the dog might (mistakenly) think it an easier target.

The owner could also have mitigated the damage by covering his vehicle while it was in the garage. The scratches might not have been quite so severe if the nails had to go through a couple of layers of vinyl or plastic.

BOTTOM LINE: Making sure a storage facility is secure requires more than putting a lock on the door. Thieves aren’t the only ones who can hurt your collector car; wild animals can find a way in and wreak havoc. Ever owned a car where mice or squirrels got in, chewed up the wiring, made a nest in the heat vents – then died? If you insist on using your garage as a doghouse (not just yours), find another home for your other pet – your collector car.