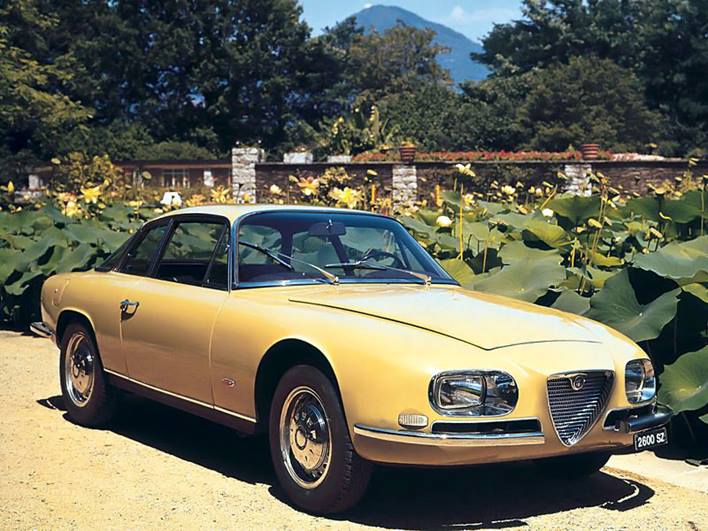 In the closing weeks of 2015, the record for the highest figure paid for a British car in a public auction was smashed when £9.4m changed hands for a superbly-restored Aston Martin DB4 Zagato.

The DB4 Zagato is without doubt a stunning design- the rounded, flowing lines of the body are a study in minimalist perfection, the design left undisturbed by cowled-headlamps and sunken lights, and yet it unmistakably remains an Aston Martin.

The designer was Ercole Spada, and the DB4 Zagato was his first creation for the legendary Carrozzeria. He followed it up with the equally beautiful Alfa Romeo Giulietta SZ and the quirky OSCA 1600 GTZ; his light was burning brightly. But then in 1961 Alfa Romeo returned and presented Spada with his greatest challenge- one that some believe defeated even this great man.

In keeping with tradition, Alfa wanted a Zagato-bodied sports car based on their top-of-the-range model which was about to be released: The Alfa Romeo 2600, available as a boxy saloon, a flowing Bertone coupe and a beautiful Touring Spider.

With a powerful straight-six engine, Solex carburettors, disc brakes and (in the coupe at least) a sumptuous interior that included electric windows and leather seats, the Alfa 2600 series were powerful and stylish grand tourers. All Zagato had to do was strip it down, build a streamlined and beautiful body, add some mechanical tweaks, and present the public with the next 150mph (as specified by Alfa) supercar.

But there was a catch. For reasons still unclear, Alfa Romeo specified that the body of the new Zagato masterpiece must be made in steel, rather than the expected aluminium. This made Spada’s job extremely difficult to achieve.

The first prototypes were based on the 2600 Spider chassis, which at 2500mm has the shortest wheelbase of the series. But the chassis was still too heavy, and Spada shortened it further, without much success. Spada said, “After we had built the first prototype, we did some aerodynamic testing and realised the car could not even get close to the 240 kph/ 150 mph we were looking for… we messed about with the 2600 quite a lot.”

There was another problem. Although the straight-six, twin overhead cam engine was all aluminium, the sand-cast head and block were extremely heavy. This weight plagued all of the 2600 range, giving a nose-down stance and making slow-speed driving very difficult.

The first prototype borrowed much from both the DB4 Zagato and the Alfa Romeo Giulia TZ, which Spada was also working on at the same time: cowled headlamps, one-piece bonnet, a low roof line, sloped rear window, and a stepped- ‘Kamm-tail’ rear end. This prototype, painted in dark blue, was first shown to the public in October 1962 at the Turin Motor Show, then completely rebodied and finished in green before being shown in Geneva in March 1963. This ‘long tail’ chassis 853001 has remained in the ownership of Alfa Romeo ever since and is maintained in the Museo Storico, where it now sports yellow coachwork.

But these elements “aroused considerable perplexity”1 and by the time the production car was officially unveiled at the Frankfurt Motor Show in 1965, the design had been muted. Gone were the headlamp cowls, replaced by sunken lights surrounded by stainless steel shrouds. The bonnet had been changed to a more traditional design, and the rear had been adapted with a more steeply-raked screen and a conventional boot. The flanks looked bulky, so the sills were painted black.

Underneath the surface, the car was mechanically almost identical to the Spider. The engine was fed through triple Solex 44-PHH carburettors and still produced 165bhp. The five-speed gearbox ratios remained unaltered, and even the exhaust system was borrowed from the donor car. True, the 2600 SZ now ran on magnesium 175 x 400 wheels rather than 165s, and was 80 kg lighter than the Spider, but this only gave the car a 10 km/h advantage over its ‘standard’ stablemates.

Furthermore, the build quality, especially on earlier models, was very poor. When one of the pre-production cars was taken back to bare metal a few years ago, it revealed ill-fitting bodywork and ad-hoc fixtures, all believed to be original.

The public response to Spada’s most recent work was to stare in awe, but then walk away. The list price- three times that of the standard 2600 Sprint- put it in the realm of the Ferraris, but without a racing pedigree the model failed to attract many buyers. In all, only 5 prototypes and 100 production models were made.

Today that rarity has given the 2600 SZ an attraction all of its own. Blighted by rust, almost all of the 63 cars that are currently known to the Alfa 2600SZ Register have either been, or are being, restored. But once done properly, with good panel gaps and high-quality paint, the beauty of Spada’s design becomes once again evident. The nose-down attitude gives it a poised look, like a cat waiting to pounce. And while no sports car, the big 2600 engine, comfortable and stylish interior and ample space make this car a top-class grand tourer.

Today there are believed to be only two Alfa Romeo 2600 SZ left in the UK. The Hagerty Price Guide has seen these rare cars rise significantly in value over the past few years their rarity and pedigree is appreciated, with the best cars now achieving well over £200,000 (Jan 2016). But while this may not be close to the value of the DB4 GT Zagato, it is probably in line with Spada’s own view of his unusual design: “From an aesthetic point of view the result was reasonably satisfactory.”

John Mayhead is a former owner of an Alfa Romeo 2600 SZ and has owned and restored a number of other Alfa 2600 models.
1 D’Amico & Tabucchi, Alfa Romeo Le Vetture di Produzione, 2007.