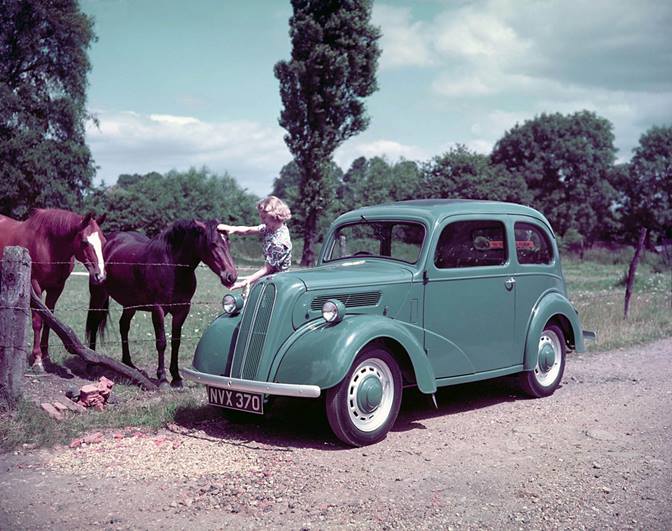 There are often consequences arising from an office party, especially if you decided to photocopy certain parts of your anatomy and send the pictures via internal mail to the export manager. And now your punishment is to drive the automotive badge of shame along the motorways and trunk roads of the land and to be generally laughed at by Reliant three-wheeler owners. These ‘poverty spec’ cars were the fleet manager’s last resort: the cheapest cars, devoid of optional extras, often in an earthen shade that offended all but those with the strongest constitutions. Here are our top ten entry-level unexceptionals.

At a price of £390, including purchase tax, the Popular was the cheapest ‘full size’ new car on the road in the mid-late 1950s and few vehicles are its equal in terms of sheer ingenious parsimony. The list of fittings included a speedometer, seats, glass and one vacuum powered windscreen wiper (which slowed when the throttle pedal was operated). The Bakelite dashboard of the outgoing Anglia E494A was now replaced by plain metal, sun visors and a parcel shelf there were none and the extras list embraced direction indicators. A further option was a floor for the boot, otherwise your luggage had to rest on the spare wheel, and the top speed was a just-about-adequate-for-the-period 60 mph. It is often very hard to believe that the Popular was in production at the time of the Preston-by-Pass motorway being opened and the debut of the Mini but between 1953 and 1959 Ford sold over 150,000 examples to grateful drivers.

A lack of heater and windscreen washers were par for the course in a small car from 1953 although the “bomb crater” grille and the sliding window panes did make the Standard Eight look a tad cheap compared with the Austin A30 or the Morris Minor. But where the Eight really achieved distinction was via its solitary windshield wiper and its ‘rainproof’ and ‘unusually large boot’ that was ‘an interesting feature of the new Standard’. What was even more interesting was that the Eight’s ‘dust sealed’ luggage compartment had no external access; the rear seat had to be folded if you wanted to retrieve your suitcases. Winding glass was the province of the 1954 De Luxe and owners with a taste for the good life would have to wait until 1957 when the Gold Star version actually came with a boot lid as standard.

The 2.4 ‘Standard’ was a Jaguar without a bonnet mascot, fog lamps, folding rear armrest, heater, windscreen washers, a cigar lighter, rev counter, clock and courtesy lights.  Browns Lane claimed that the Standard model ‘does not carry various items which many owners prefer to dispense with or to add later according to their preferences’ and the basic version was listed throughout the Mk.1’s production run. However, only 14 seem to have been made and these were for internal use only. One reason could be that for a mere £50 more, ‘for the motorist demanding the utmost in specification, the Special Equipment model will make instant appeal’ – i.e. unless you are prepared to pay this very reasonable sum you will appear an utter cheapskate to the denizens of your local golf club. Not even fleet users such as the police took to the Standard and, somewhat unsurprisingly, none are known to survive.

As the story goes, 60 years ago the Gas Board placed an order for a fleet of strip-spec Minx saloons only for the deal to fall through. This left the Rootes Group with the prospect of selling a large number of Hillmans that were devoid of virtually any form of comfort. They were also all finished in a thrilling shade of brown. The solution was as brilliant as it was simple – market them as ‘Minx Specials’. And they certainly were a car of distinction, from their lack of a main beam warning lamp, rear ashtrays and a water temperature gauge to their simplified dashboard and barely any chrome whatsoever. Rootes continued to offer the Special for many years and throughout the late 1950s and early 1960s it was associated with struggling commercial travellers to whom success meant a Dunn & Co suit. And finally being allotted a Minx De Luxe with its duotone seat trim.

British buyers were sadly denied the R3, Renault’s attempt to make the ideal car for those consumers who regarded the R4 as just too comfortable. Thus, the C-pillar window was replaced by sheet metal, the front bumper was essentially a tube and the paint choices ranged from the dynamic ‘Pyramid Gris’ to the ever-popular ‘Pyramid Gris’. The engine was a 603cc unit, as opposed to the 747cc R4 engine, which meant the R3 occupied a low 3CV tax bracket, and inside the roof lacked any form of headlining and front passengers sat on a fixed seat. There was no need for a fuel gauge when there was a dipstick attached to the filler cap and the rear passengers did not merit opening side windows. Alas, despite the price saving only 2,571 R3s were sold – maybe the customer base of masochistic French farmers was not extensive enough…

Chiefly recognisable via their mesh radiator grille and lack of chrome trim, the standard models offered single speed wipers, a metal dashboard, no clock, no cigar lighter, rubber floor mats, seats trimmed in plastic and devoid of armrests and one sun visor. Few examples were sold to private individuals as this big Austin was primarily aimed at the hire car/County Constabulary markets; the archives of Essex and Hampshire police contain many pictures of such A110s on patrol. Few examples of the A110 Standard still exist, partially due to those individuals who think that The Wicker Man is public information film (i.e. banger racers) and also because of its price. There may have been a £115 saving over the price of the De Luxe model but the basic Westminster still cost as much as the far better appointed PB-series Vauxhall Cresta and a Ford Zodiac Mk.III.

Some cars attempt to hide their poverty-specifications but this Chevette is one of the very few cars to wear its status with pride. By 1980 standards, the trim of the ES was not at all bad with its carpeted floor and two speed wipers (although a heated rear screen, backrest adjustment for the front seats and a second sun visor were clearly not on the menu) and its most notable aspect was its badging.  Be it in hatchback or saloon form there was always those bold black letters (which stood for ‘Economy Special’) on the boot lid. As a method of proclaiming a Chevette’s level of standard equipment this was about as subtle as emblazoning the word ‘Pauper’ in neon lettering on the sides. ES drivers were known to only approach Little Chef car parks after dark in order to avoid potential social disgrace.

There is a fine art to the marketing of an entry level version of a fairly prestigious model and it is one that apparently eluded British Leyland in 1977. The various distinguishing features of the 2300, from the lack of a nearside door mirror and the lack of carpeting on the boot floor to the instrument panel that was denuded of its tachometer and oil pressure gauge, all combined to present a clear message to other drivers. Unfortunately, this took the form of making anyone who took the wheel appear to be either a very junior executive or one who had really annoyed their fleet manager. Power steering was extra, electric windows were not even an option and in 1978 the entry level SD1 must reminded not a few motorists of a certain sketch on The Frost Report. If the 3500 was John Cleese and the 2600 Ronnie Barker, then the 2300 was Ronnie Corbett. ‘I know my place…’

This was a car that was so low in the 5 hierocracy that sometimes Renault did not even display its picture in the all-model brochure, such was its lack of status. The TL was not exactly the last word in decadence so it was initially difficulty to wonder how it could be made any less luxurious but La Regie was equal to the challenge. After all, had they not previously manufactured the R3 and the 5L was certainly a car in that tradition. Power was from the 4’s 782cc engine (although UK models had the 845cc plant), front brakes were drums rather than discs and the cabin featured a dashboard mounted gear change and fixed backrests on the front seats. Examples of the L do occasionally surface in the British classic world, and to see any example at a car show is to be reminded that they are now far rarer than any Alpine or Gordini.

The Popular was essentially the base spec model bearing a revived badge from the 1950s and giving a 1979-vintage Ford enthusiast a saving of £300. Exactly how Ford managed to achieve this sum – a not considerable one to a driver on a strict budget -  was immediately apparently on entering the Popular and settling yourself on seats finished in the finest vinyl trim available to humanity. A dipping rear view mirror, a passenger sun visor, reclining front backrests and door pockets – all of these were totally absent. The washers were operated by a foot pump, the rear hatch lacked both a heated rear screen and a windscreen wiper while a reversing lamp was an extra. Naturally there was a slick sales campaign for the Popular, including this rather clever television commercial that tries to convince viewers that here was a car for upwardly mobile urbanites. https://www.youtube.com/watch?v=4ZkNNUXF2Cs