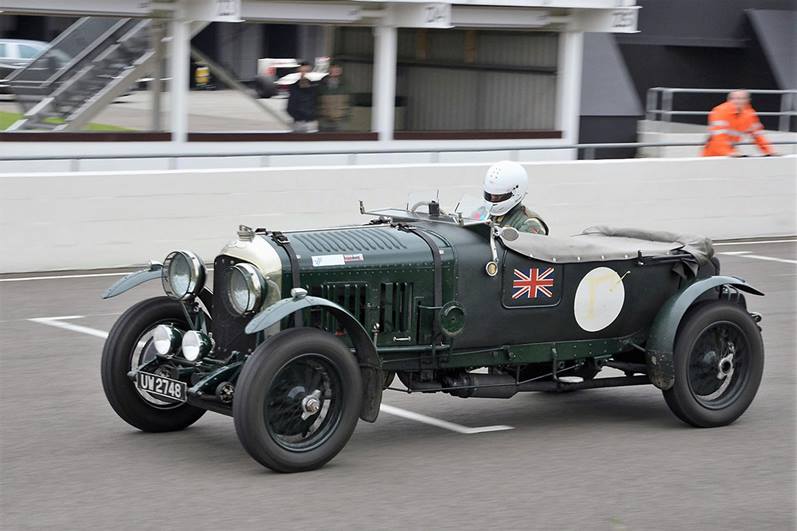 The Sussex Downs were once again treated to the distinctive bellow of vintage Bentleys being given their head as the Benjafield Racing Club recently returned to Goodwood Circuit for its sprint event. The deep, hollow bark at full chat (entirely in keeping with these racing leviathons) is possibly only bettered when the counterpoint whine of a supercharged "4 1/2 Blower" is added. Although the "W.O." Bentleys were, naturally, out in force they were joined by later examples sporting the winged B as well as representatives of other marques both old and new.

In the paddock there was the undeniably relaxed and convivial air that one would expect of a club born specifically to maintain the ethos of the gentleman racer in general, and the Bentley Boys in particular. Even the initially grey and drizzling conditions couldn't entirely dampen the garden party atmosphere, where laughter-punctuated conversation mixed easily with the occassional waft of cigar smoke. Although the BRC sprint came to Goodwood out of practicality (it is conveniently located for a large number of the members), the match of circuit and cars has proved to be a winning combination. Access for vistiors is excellent and the BRC clearly appreciate the welcome they are given by both the staff and marshals at this iconic circuit.

The collection of machinery was as distinguished as it was eclectic. Event organisers Chris Lunn and William Medcalf eschewed the default make, bringing along their Talbot 105 Sports and Morris Mini instead. Julian Grimwade's single seat Frazer Nash Norris Special, James Broome's Camaro SS and Tim Abbott's dramatically-quick BAC Mono clearly illustrate the variation to be found among those taking part. Robert Abrey's monstrous Chalmers of 1912 took the honour of being the oldest competitor. Demonstration runs were also laid on with Lorne Jacobs's wonderfully grimy Napier Bluebird joining the legendary Pacey Hassan Special and, from the ranks of more modern legends, Martin Overington's ex-Derek Bell Porsche 962 and Megatron-Arrows.

As would befit a club where 60%-70% of the members are active, this was primarily a competitive event. The format is simple with batches of cars being lined up in the pits and then released individualy at short intervals, the time posted being from the standing start to crossing the finish line which is set on the main straight alongside the pit entry. The driver then simply has to slow down by the end of the pits and turn into what would normally be the assmbly area. This was something that tested the nerve of both driver and marshal alike on one or two occasions through incalcitrant pre-war drums that had been hard-pushed for a lap.

The upright saloons that took to the track along with specials and Vanden Plas bodied racers provided quite a spectacle, displaying the dramatic roll naturally induced by a high centre of gravity coupled with unsophisticated suspension. This all looked rather alarming from the outside but nonetheless everyone seemed to be pressing on in a thoroughly determined manner. Two of the fabled Blower Bentleys competed and were joined by siblings that ranged from a 3 litre saloon, through 3/4.5s and normally aspirated 4.5s to a lone Speed 6. The Derby Bentleys and beyond were represented by Olaf Pothoven's and Paul Forty's specials.

Power-on oversteer out of the chicane led to some debate over whether it was tighter than last year or not, but didn't stop the posting of some impressive times. Demonstrations and photographic opportunities with the ‘grid girls’ over lunch preceded a wetter afternoon which saw some of the cars stay in the paddock. The prize giving at the evening dinner in the Goodwood Hotel  rounded off the day in a suitably singular fashion. Fruit took the place of the usual tin cups with class wins for Chris Lunn (oranges), Ewen Getley (pineapples), Chris Guest (rhubarb), Julian Grimwade (kiwi fruit), Paul Forty (a pair of melons) and Robert Crofton (a bunch of bananas). Special prizes were also presented to Martin Overington (a bunch of grapes) and Mark Andrews (undisclosed, possibly on legal or moral grounds).

The jolity and bon homie could not entirely distract from the absence of Stanley Mann though. Stanley, founder and leading light of the BRC, was hoping to race the 8 Litre Special this year but a fall at his workshop sadly took him from us before he had a chance to take the wheel in anger. The BRC marked his passing by push starting his intended mount at the start of two, emotional, demonstration laps. He was a real character who would take the time to talk vintage Bentleys with any wide eyed enthusiast. How better to remember him then, other than with his mighty single seater heading off into the distance - accompanied by that wonderful exhaust note that seems to go on forever?