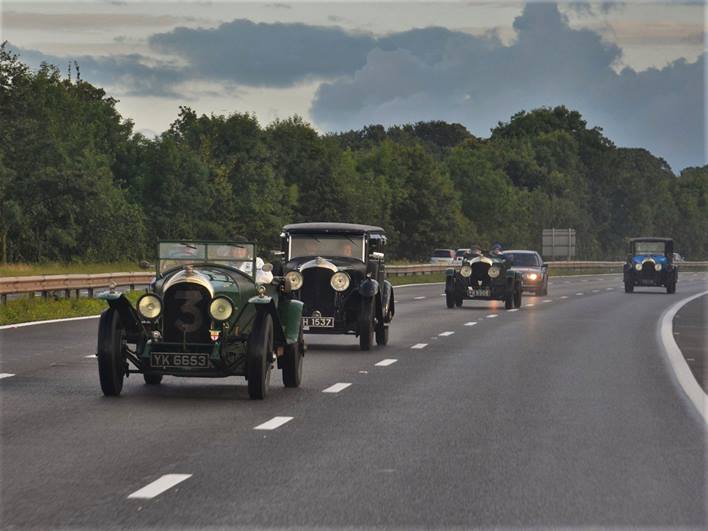 The Return of the Bentley Boys

The tales of the ‘Bentley Boys’ are rich in history and legend. These were the gentlemen racers from the 1920's who would drive their British Racing Green leviathans to Le Mans, win, then drive back for wild parties in Berkeley Square. Naturally, being close friends and well-heeled as well as team mates, it followed that they would end up with "town" apartments close together in this exclusive part of London. More than one such party ended with the group racing their steeds around the square until sleep deprived neighbours called the police and festivities were brought abruptly to a halt.

This was an exclusive, glamourous club but that does not lie at the heart of their appeal. Bernato, Benjafield and Birkin; the names are highly evocative but surely, as familiar as we are with the racing exploits of our heros, being a Bentley Boy was as much about the spirit of it all? The slightly wild, fun loving spirit they all shared.

Come forward 90 odd years from the Roaring Twenties and the Benjafield Racing Club now carry the standard of the "W.O." cars into battle. Not least during the Le Mans Classic, this year held from the 8th to 9th July. 2016's race was very special as Bentley specialist William Medcalf took MH7580 back, this 3 Litre Speed model becoming the first works team car to return to compete. Although she didn't finish in 1925, this time she helped the BRC to achieve a very strong result- a highly commendable 6th out of 64 for Medcalf and his driver Jonathan Turner (in the oldest car in the competition), with none of the other team members finishing outside of the top 20.

During the event Katarina Kyvalova, sharing Nigel Batchelor's 4½ Litre "Long Chassis", also became the first lady to race a Bentley at Le Mans. Nick Swift, possibly most familiar to readers for his giant-slaying antics behind the wheel of a Mini at Goodwood's Members Meeting, amazed all by his immense turn of speed given that he had never raced a pre-war car before.

To top off this years event, Medcalf dreamt up the idea of recreating the golden era of the marque by driving the cars straight back from the event and parking them in Berkeley Square. He approached Jack Barclay, whose flagship Bentley and Rolls Royce showroom is on the square, to see if they were interested in helping out. To their credit they immediately insisted that if it were going to be done, then it would be done properly. Thus on Monday 10th July, once the sound of racing engines had died down and the French countryside returned to peace once more, the noses of the BRC's cars were pointed North and the run for London began.

Having successfully crossed the channel, we picked up the last contingent of 4 cars just North of Petersfield in Hampshire and chased them up the A3 through a very vintage car-unfriendly deluge. Just after the brief respite offered by the Hindhead Tunnel, the rain stopped and glorious late afternoon sunshine replaced it from there on in. As the traffic slowed with the approach to central London we were given more time to observe the effact on pedestrians, with them invariably smiling and taking photographs of these visitors from another age.

Entering Berkeley Square itself, Jack Barclay's was immediately obvious in the far corner. The low sun glinted off a myriad of nickle plated radiators and highly-polished bonnets- over 20 pre-war ‘W.O.’ Bentleys were already there to greet the racers. Surely this must have been the largest gathering of these thoroughbreds in central London for many a year?

The showroom had been cleared for the party and as we entered we were greeted by a waiter carrying a tray full of Champagne saucers, the accompanying electronic music giving an air of something really quite precious and remarkable. There was barely the chance to register this before we were all handed Union Jacks and ushered outside to be met with the astonishing sight of the vintage Bentleys pulling away to roar around the square en masse, mingling with the constant stream of modern traffic. Good natured cheering accompanied each wave as in turn they accelerated hard past their adoring public. Even when none were in sight that hollow bark could be heard from some quarter, echoing off the buildings that had also born witness to something very similar, so very long ago. Finally the racers from the weekend were lined up and Champagne sprayed by the crews as a fitting, celebratory, finale.

Returning to the party inside, now with MH7580 as the centre piece, I grabbed another glass of fizz from a passing waiter and spoke to some of the participants. I asked Jurgen Ernst, who had campaigned his 4½ Blower at Le Mans that weekend, what he thought of it all. "Bentleys have always been special" he told me, "Even now there is a camaraderie you don't get with any other car. It’s in the spirit of the olden days - they still have that spirit." Then I realised what it was that had been eluding me. The racing overalls were modern, Ferraris and Boris buses passed outside, but the relaxed friendliness and unforced bubbling humour, lacking in any artifice, combined to tilt things ever so slightly into the magical. This was no mere modern re-enactment, rather it was a continuation after an absence of far too long. It gives me immense pleasure to report that, in every sense, the Bentley Boys are back!