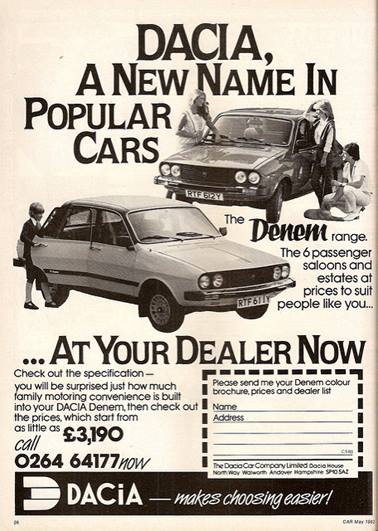 Top ten cars from behind the Iron Curtain

This Top Ten is a celebration of those Eastern European cars that, at point in their careers, were a reasonably familiar daily sight or at least widely advertised. What virtually all of the vehicles here offered the consumer was a low price, mechanics that were often straightforward to the point of simplicity and a comparatively lavish amount of equipment. Plus, by the 1980s, an increasingly tedious amount of jokes from certain TV comedians…

Škoda Octavia 1959-1971
The original Octavia was probably one of the first East European cars to be sold in any great number in the UK and for a mere £744 17s 6d the British buyer was promised ‘racy good looks’, ’80 mph’ seating of ‘foam rubber; and ‘a built in heater-demister’. Autocar sniffed that the Octavia ‘does give the essentials of cheap family motoring’ but this was the car that establishes the marque’s presence in the UK. The saloon ceased production in 1964 but the Combi estate, marketed under the slogan ‘Surprising Škoda’, continued until 1971 as a serviceable and well-appointed alternative to the Morris Minor Traveller.

Škoda 1000/1100 MB 1964-1969
For anyone who might have otherwise considered a Renault Dauphine or a Fiat 850, the Skoda 1000 MB seemed quite a bargain. A rather stylish four door saloon that came complete with a split rear seat, a steering column lock and a radiator blind for well under £600 had to be worth a look in 1964. The 1000MB was Skoda’s first rear engine car and it is sometimes forgotten that its aluminium motor was the first power plant in the world with full press mould construction even if the new owner’s main priority was ignoring the neighbours whispering that you were a possibly a Communist sleeper agent.

Moskvich 408/412 1964-1990
52 years ago, the hep tail-fins of the 408 helped to mask that its 1400cc engine was a 1938 Opel-derived unit with 0-60 in approximately five months. Fortunately, the 1967 412 was powered by a BMW derived 1.5 litre OHC engines and the 434 van was especially prized among jobbing builders. However, the marque’s reputation was increasingly damaged by negative press – one report suggesting that the Moskvich felt as though ‘it is going to trip over its own front wheels when cornered hard’. British sales stopped in 1976 and today you are more likely to see a 412 in a Cold War film than on the road.

Wartburg Knight 1966-1988
The Wartburg always seemed to be found in small ads in Motor magazine, often those placed by garages with telephone numbers such as ‘Hamble 469’. In its native DDR, a driver would consider himself/herself fortunate if they took delivery of their new 353 in 1976 but in Britain the ‘Knight’, as the Wartburg was re-badged, was sold on the strength of it level of appoint-ments. The two stroke engine was not intended to be the last word in refinement, Wartburg owners often travelled in a cloud of blue exhaust smoke and the dashboard actually looked as though it was biodegradable. But Automobilwerk Eisenach still sold over a million examples.

Polski-Fiat 125p - FSO 1300/1500
A Polish cousin to the Lada, with a body was from the larger 1967 Fiat 125 and power plants, suspension, transmission, and dashboard from its 1300/1500 Berlina predecessor. In 1975 the 125p was offered to the British public and although the strip speedometer of both models implied promised performance that was about as thrilling as the Southern Television farming programme for just £1,283 you had, electric screen washers, quad headlamps and reclining front seats plus greater boot space than in its Soviet counterpart. The expiry of the FSO/Fiat agreement in 1983 lead to the demise of the Polski-Fiat brand but the FSO 1500 only ceased production as late as 1991. Probably the best model was the estate car, which offered space, if not a great deal of finesse.

Lada 1200 1970-1988
If you visited the 1973 London Motor Show with the intention of trading in your ten-year-old Singer Gazelle for a new car despite having only the deposit payment for a Mini 850, the Lada 1200 was a very viable offering. It looked fairly cotemporary – the Fiat 124 on which it was based was still being made and there was a vast tool kit that was originally intended for motorists stranded in Siberia where the chances of encountering a passing AA patrolman were fairly remote. And during the 1970s the Lada even had the kudos of being the Star Prize on Sale of the Century! All together now – ‘And now, from Norwich – it’s the quiz of the week!’.

Škoda Estelle 1976-1990
Manty Škoda fans are still annoyed about the negative treatment meted out to the first British market Estelles by the motoring press, especially adverse comment regarding its handling and road holding. The facelifted 130 models fitted with semi-trailing arm rear suspension introduced in 1984 did much to improve the model’s image - ‘handles consistently’ mused Autocar in 1986 - and the 1988 Rapide Coupe was regarded by enthusiasts as a miniature (and more affordable) 911 alternative, Furthermore, Škoda’s works team scored class victors for 17 successive years in the RAC Rally and the Estelle was instrumental in their success.

FSO Polonez/Caro 1978 – 2002
‘“Does your car fall short of our car?” ran one slogan although Car once unkindly described the hatchback body atop the 125/1500 as resembling ‘a cheap wig’. It also initially lacked a folding rear seat, which somewhat diminished the Polonez’s versatility, for all of the remotely controlled hatchback but any motorist defecting from the bleak economies of the Vauxhall Viva E r would have found adjustable steering and instruments aplenty. A 1991 facelift saw the range renamed the Caro but after in 1995 FSO was sold to Daewoo its future was limited. In 1997 UK sales ended, the last FSO Caro, still looking as suave and svelte a rainy November afternoon in Southampton.

Dacia 1300/Denem 1969 - 2006
In late 1982 there were two major new entrants in the British family car market – the Ford Sierra and ‘the very acceptale Dacia Denem’. The Romanian firm built their version of the Renault 12 (the first models were made from CKD kits) until as recently as 2006 but despite the allure of the flagship GLX with its digital clock and electric front windows buyers stayed away in droves. Imports ceased after only two years and possibly the most famous Dacia owner was the Romanian Embassy in London who ran a fleet of Denems – ‘Why Ambassador, you are spoiling us’.

Lada Samara 1984-2013
Was it really 32 years ago that the Samara made its debut? In 1984 the major talking points about the new Lada were that its coachwork owed nothing to the Fiat 124 (even if early prototypes used 127 engines) and its front wheel drive engine layout. British drivers had to wait for another three years and the reception was not always cordial. Those acerbic chaps at Car wrote in 1994 ‘If you own a Lada Samara – our condolence’ and moaned about ‘coarseness’ among ‘many deficiencies’. As it was, the marque would last for only another three years in the UK and the pioneer FWD Lada genuinely marked the end of an automotive era.