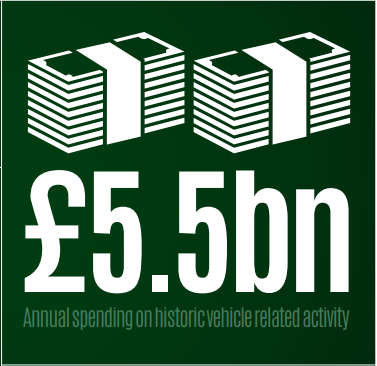 A huge contribution to the economy (graphic courtesy of the FBHVC)

The Federation of British Historical Vehicle Clubs (FBHVC) does a great job looking after all of its affiliated owners’ clubs and registers. But another hugely important part of its role is to provide research into the classic car hobby. Every few years, the FBHVC produces an overview of the entire classic car industry in the UK, and the latest edition has just been published.

In terms of the benefit to the economy, the FBHVC reports that the historic vehicle movement contributes £5.5bn per annum- that’s the same as the cost of the annual Crossrail contracts. Again, this has leapt up: when the FBHVC reported first in 1997, the figure was £1.6bn and in 2011 £4.3bn.

One of the most striking differences is the number of miles, on average, that historic vehicles are used annually. In 2011, this was reported as 288 miles, but in 2016 this has risen to a huge 1,124 miles. This could be a result in the rise in popularity of modern classics, or a reflection of the increasing number of classic car events.

The report also detailed the most popular models of classic vehicle owned. MG tops the classic car list, with 6%, followed closely by Ford (5%) and Triumph (4%). Honda is at the top of the classic bikes list (5%) followed by BSA and Triumph (both on 3%). Massey Ferguson (3%) tops the agricultural machinery list, and non- specific LGVs and HGVs jointly top the commercials (2% each).

Finally, the FBHVC have assessed that the total value of all historic vehicles registered in the UK is £17.8bn, the first time they have estimated this figure, and that it employs nearly 35,000 people- a rise of 28% since 2011.

So what does all this mean? In general, it seems to corroborate what we all instinctively felt- that the classic vehicle movement in the UK is thriving. The great thing about this survey is that it gives substance to any discussions regarding the hobby, especially when new legislation is proposed.