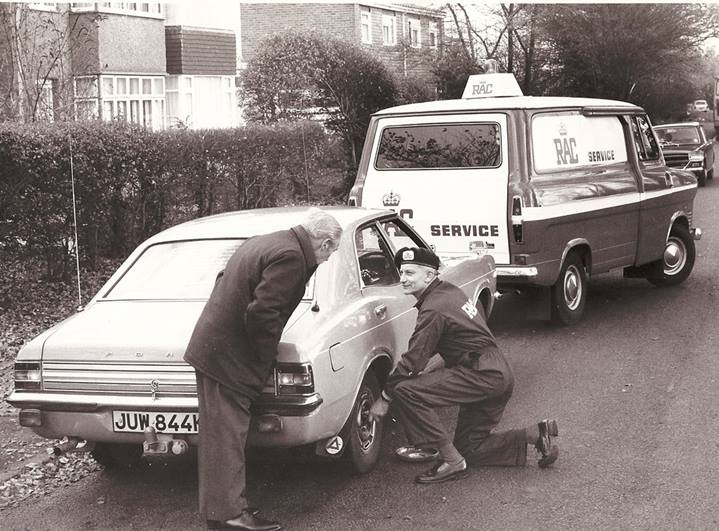 To celebrate Hagerty’s partnership with the RAC, we celebrate the 120-year heritage of The Royal Automobile Club. Here are a few of the many key moments from its long history, and remember – if a patrolman does not salute, stop and ask the reason why!

1897 – The Foundation of The Automobile Club of Great Britain
The engineer and businessman Frederick Richard Simms claimed to have invented the words ‘motorcar’ and ‘petrol’. He created, together with Robert Bosch, the Simms-Bosch magneto-electric ignition; alone he created the rubber bumper and devised an early form of direction indicator. The first President of The Society of Motor Manufacturers and Traders, in July 1897, at No.4 Whitehall Court he also founded The Automobile Club of Great Britain, as a lobbying body for the growing number of motorists. 120 years later, his influence is still felt.

1901 - Uniformed patrols
The first RAC patrols wore a quasi-military uniform and by 1922 some were issued with Ivy motorbikes in place of bicycles. Over the decades their skills and experience allowed them to cope with almost any motoring scenario. These could vary from changing a wheel in a safari park to gently explaining to a driver that the car he had just bought from a wide-boy dealer appeared to be glued together. Older readers may recall how patrols would, until 1963, salute all vehicles bearing the RAC badge. If they did not, the reason might be a serious fault with your car. Or it might be a traffic police officer lurking around the next corner with a stopwatch in his hand.

1907 – The Royal Automobile Club
In 1900, the then Prince of Wales bought a two-cylinder Daimler and on acceding the throne in 1901 as King Edward VII, became the first British monarch to be associated with the motor car. On the 27th February 1907, he granted permission for the Automobile Club to use the ‘Royal’ prefix. He was known for constantly urging his chauffeur to overtake - ‘We don’t want his dust!’ – and his seal of approval of the Club was to ‘honour automobilism as a branch of the national life’.

1912 - The introduction of the Sentry Box
In the days before mobile communications, there were once as many as 500 boxes across the UK - as much an aspect of roadside architecture as sign posts. The wooden edifice initially contained petrol cans and first aid kits but they were soon used as a means of contacting the patrolmen by telephone, through a network of 16 regional offices– a vital development before RAC vehicles were equipped with wireless. Members would be issued with their own set of keys and after trudging miles in the rain after a breakdown, the blue box was a very welcome sight indeed.

1912 - The ‘Get You Home’ Service
On the 1st September 1912, the RAC launched their pioneering service which covered breakdowns that occurred within a 20-mile radius of your home address. Members applied for a brass token and were advised in the event of an automotive problem they should ‘send this Talisman by an RAC Touring Guide or by the first available messenger to the nearest RAC repairer’. The Club’s appointed garage would ‘at once send a relief car to convey you and your party home’ as the disc’s owner was indemnified against the costs incurred. It was a seemingly simple arrangement but within 20 years it had assisted hundreds of thousands of motorists.

1932 - The first RAC Rally
In April 1932, a Motor Sport magazine headline stated that ‘FIRST EVENT OF ITS KIND A GREAT SUCCESS’, with some 367 entrants and 342 starters. The RAC Rally had nine starting points – Bath, Buxton, Edinburgh, Harrogate, Leamington, Liverpool, London, Newcastle and Norwich – with different 1,000-mile routes that all finished in Torquay. Colonel A H Loughborough, driving a Lanchester 15/18, won £25 and The Autocar Trophy. And, as a mark of how distant 1932 seems, ‘One lady driver deserved a special medal. She drove single-handed throughout, had no rest, no meals, and smoked only seven cigarettes’.

1957 – The Radio Rescue Service
Sixty years ago, the RAC launched its first wireless-controlled emergency breakdown service. In previous years, a patrolman would report to his sentry box at a fixed time to receive his orders but now a three-strong fleet of Commer J2s would cover London and the Home Counties, with a central radio room directing them to motorists in trouble. A team of nine mechanics worked a shift roster and the Rescue Service was ideally timed to meet the various challenges of the growth of private car ownership in the late 1950s, especially as the MOT test still lay some three years in the future.

1959 – Motorway Patrols
With the opening of the Preston by-Pass on 5th December 1958 and the M1 on 2nd November 1959, the RAC formed a Motorway Patrol, which operated between London and Birmingham. As so many vehicles on British roads were wholly unfit for speed-limit-free travel – the 70-mph regulation would not be enforced until 1965 – a breakdown service was essential and the RAC’s Series II Land Rovers were equipped with towing devices that could rigidly hold a broken-down vehicle, allowing its owner to solely concentrate on steering. Members were also issued with a free booklet entitled Know Your Motorway, which contained a list of nearby garages and such helpful advice as ‘Do not walk on the carriageways’.

1963 – Mini Vans
For many years, the RAC was associated with Norton motorcycles, which would remain in service until as recently as the 1980s. However, in 1963 the Club placed a £38,000 order for a 100-strong fleet of Morris and Austin Minis vans, a move that greatly enhanced the organisation’s image. The running costs were low (BMC’s publicity claimed up to 50 miles per gallon) and the equipment included a parcel shelf lamp, a sun visor and a ‘driver’s seat with adjustment’. All of which would have been sheer decadence to a patrolman more used to riding a motorcycle-sidecar combination in the depths of winter.

1975 – The Vehicle Recovery Service
In order to compete with such recent competitors as the National Breakdown Recovery Club, the RAC introduced its Vehicle Recovery Service. A fleet of Range Rovers would transport a car, its driver and up to three passengers to either their destination or their home in the event of a breakdown or accident. Within three years, 500,000 people had signed up to the service, which also had the advantage of freeing many patrols from having to undertake roadside repairs. One notable incident in the history of the Recovery Service was when a farmer wished to take his prize bull aboard the RAC transporter…

1999 – RAC Breakdown Becomes RAC PLC
The RAC’s breakdown services had originally been part of the Royal Automobile Club’s ‘Associate Services’ but in 1999 this element was sold by the members to Lex Service PLC who rebranded as RAC PLC. Today, after further changes of ownership, two distinct organisations remain: RAC which continues to provide breakdown, insurance and other motoring services, and the Royal Automobile Club, a private members institution still based at the original Pall Mall headquarters.

Hagerty have a very strong history of partnership with both the RAC and the Royal Automobile Club. In Spring 2017, it was announced that every annual Hagerty classic policy would include RAC breakdown cover as standard- the start of a significant partnership between two very strong motoring brands.

All photographs courtesy of the RAC Archive.