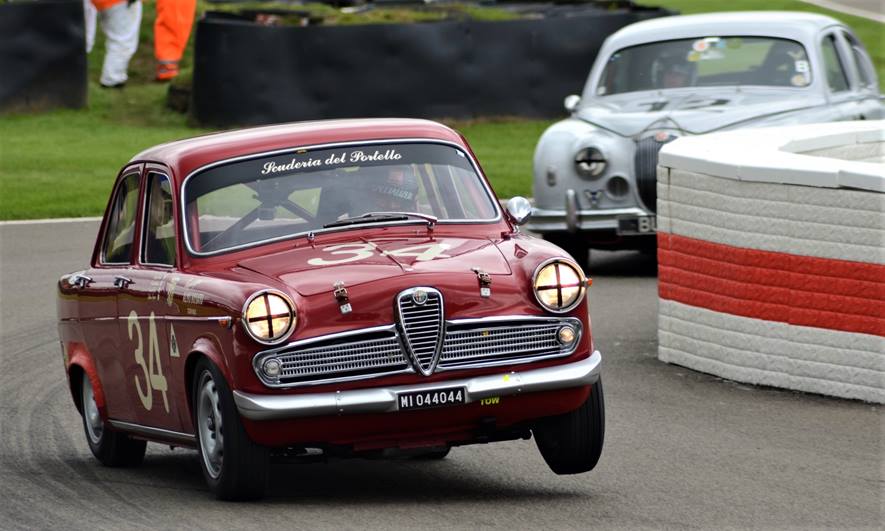 This year’s Goodwood Revival will be remembered for three things: the weather, a rather expensive Ferrari making a bit of a mess of itself, and a lovely old Ford Galaxie that did rather well in the Bonhams tent.

The event’s 20th year was marked by mainly dry mornings followed by torrential downpours on all three afternoons, Friday and Sunday being worst. This caused a certain amount of chaos in the car parks, but added another layer of complexity on the track, especially as some of the rainstorms were so localised that they only affected certain parts of the circuit. So it was during the Goodwood Trophy for pre-1950 GP cars and Voiturettes, which at one point resembled a skid pan which Michael Gans in his ERA B-Type R1B successfully negotiated to take the win.

The weather was slightly kinder to the motorcyclists during both day’s racing for the Barry Sheene Memorial Trophy, but it was in qualifying when the weather created the biggest challenge. Michael Dunlop showed his true class by setting a superb lap time despite a sodden track, but over the weekend he and his brother couldn’t convert this into a win, where the laurels went to Hose/Mainwaring-Smart and Fitchett/McWilliams.

The St Mary’s Trophy is a crowd-pleasing highlight, as this combination of endurance and touring car racers with fast and agile production-based saloons always makes for an interesting spectacle. So it proved on Saturday’s race, with scrapping throughout the pack from the off. Frank Stippler in his Jaguar Mk I had a great race, duelling with a pair of Austin A40s driven by Michael Caine and Rob Huff, but it was Tom Kristensen’s dramatic charge through the pack in a wallowing 1959 Ford Thunderbird that draw most crowd attention until a loose exhaust pipe caused the marshals to deploy the dreaded ‘meatball’ flag and call his race to an end.

The crash that people will remember though was when Andy Newall took to the grass at the end of the Lavant Straight in Anthony Bamford’s Ferrari 250 GTO/64, and despite looking for a while as if he would miss the wall, side-swiped the tyres just before Woodcote. The damage to this wonderful (and extremely valuable) car prompted a discussion on our Facebook page whether cars of such value should be raced hard.

Our final note is to mention the wonderful ex- Jack Sears Ford Galaxie that sold ‘over the road’ in the Bonhams tent. We spotted it in our preview, and predicted that with significant period racing history and four Goodwood Festival of Speed stickers on the side, this would fly past its £180,000 to £230,000 estimate. So it proved, changing hands for £471,900 including commission.

All in all the 2017 Goodwood Revival was great fun as ever, if not now a little predictable. We hope you enjoy our gallery of photographs taken exclusively for Hagerty by Actuarius, and make sure you follow us on Facebook and Instagram for more.