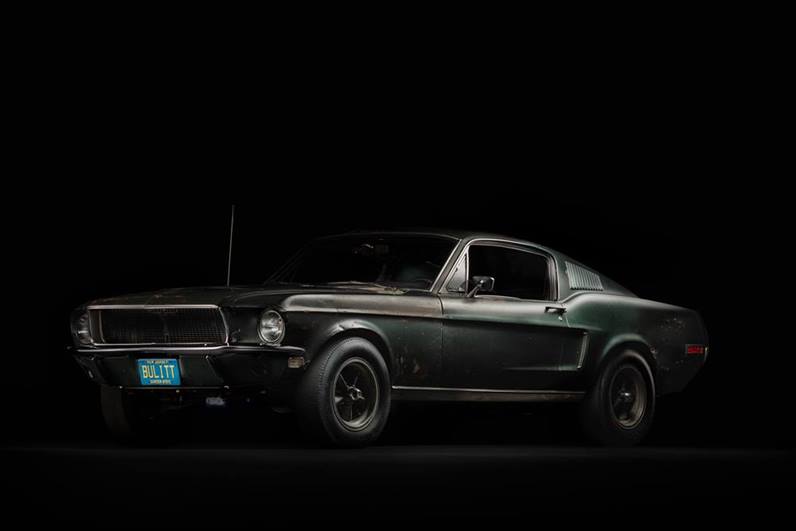 When you think about Bullitt so many of its elements -  Lalo Schifrin’s score, the extensive location footage of San Francisco and, of course, the car chase – have passed into cinematic legend so it is difficult to envisage the impact of its first screening. Of course, there is also the inevitable army of nit-pickers and general pedants, with or without anoraks, who delight in noticing that apparently omnipresent green Volkswagen Beetle (it belonged to one of the stunt team), the geographical implausibility of the chase scene, the fact that the Ford Mustang seemed to be fitted with a 20-speed gearbox and that the Dodge Charger had approximately 16 hubcaps. But these are just minor details in a film considered so important that it is now preserved by the US Library of Congress as being ‘culturally, historically, or aesthetically significant’.

The director of Bullitt was Peter Yates, a former RADA-trained actor turned works manager at H W Motors -  and subsequently film-maker. It was his third picture, 1967’s Robbery, that came to the attention of Steve McQueen as it opened with one of the finest car chases in the history of British cinema. For Bullitt, the 10 minutes 53 seconds pursuit sequence took three weeks to film. Each scene was meticulously planned and even the cable cars that appear in the street sequences were piloted by stunt professionals although the authorities refused permission to close the Golden Gate Bridge for shooting. McQueen himself could be seen at the wheel of the Highland Green Ford Mustang 390GT Fastback in close-up but, in the words of one of his doubles, Loren Janes, ‘not in the ones that could kill him’. Bud Ekins also undertook some of the driving and the Dodge Charger was piloted by Bill Hickman. The Ford/Dodge battle was devised by the great Carey Loftin who was tasked by McQueen with creating an authentic looking chase that was shot at a normal camera speed as opposed to undercranking.

The pursuit was filmed in early 1968 and Bullitt used a total of three Mustangs and an equal number of Dodge Chargers. At that time Warner Brothers had an agreement with Ford but having the hoods use a Galaxie, as Dearborn initially wanted, but these would have proved too heavy. The Dodge Charger R/T 440s were sourced from a Chrysler dealer in Glendale and the on-screen cars were extensively altered by the engineer Max Balchowsky to cope with the rigours of filming and even the ‘Bullittmobile’ camera car was powered by a Corvette engine. In a recent interview Janes noted of the numbers of cars used:

Many writers have said two, but there were three of each. We needed the extra cars in case one was damaged. The movie's shooting schedule can't be slowed for dents and things like that. Fortunately, we only had to use a second Mustang once when the first Mustang had to go in to be fixed up.

Aside from the main cars, Bullitt also features a 1964 Porsche 356 C Cabriolet driven by Jacqueline Bisset, Ford Custom taxis and several studio-owned cars parked along the streets to act as buffers should the Mustang or the Charger lose control. If the storyline is not especially memorable, the picture does showcase some of Hollywood’s finest character actors; McQueen’s friend Don Gordon played Sergeant Delgetti, Simon Oakland was Bullitt’s superior officer Captain Bennett and Robert Duvall, some years away from The Godfather, was the informant, Weissberg. Best of all Robert Vaughan essayed the kind of role that he made his own – the snide upper-class WASP villain.  Senator Walter Chalmers is the kind of honey-voiced corrupt politician who delights in owning a Lincoln Continental with a ‘Support Your Local Police’ decal on the rear bumper.

The hero of Robert L Fish’s original 1963 novel Mute Witness was Lieutenant Clancy of the New York Police Department, a character who seemed ideally suited to a world-weary middle-aged leading man; perhaps Frank Sinatra or Richard Widmark issuing orders from beneath their snap-brim fedora. At one point Spencer Tracy’s name was mentioned but for the film version the producer, Phil D'Anton gave the hero a dynamic new name and a beat in San Francisco. He was now embodied by Steve McQueen playing his first Establishment authority figure. Christopher Sandford, in one of the finest books about the actor, notes that Det-Lt. Bullitt succeeded as a character because McQueen plays him ‘as a man, not a mere action dude’ and this is apparent even during the car chase.  A motorcyclist (Ekins again) is knocked off his BSA Lightning and Bullitt momentarily skids to a halt to ensure that he is not badly injured; the instinctive behaviour of a trained SAPD officer as opposed to a cardboard hero. It was McQueen’s idea that the Mustang should have a dented wing as this was a working vehicle of a hard-pressed police officer.

50 years on, the sheer cinematic artistry of the car chase remains unsurpassed. It unfolds with no distracting music and on real urban locations -  approaches that Yates had previously used with Robbery to great effect. McQueen believed that ‘I always felt a motor racing sequence in the street, a chase in the street, could be very exciting because you have the reality objects to work with’. For the scenes that took place inside the Mustang and the Charger the cameras were mounted within the cars and as they were not cushioned, this transmitted a jarring sensation when each car impacted onto the tarmac.

Bullitt went on general release on 17th October 1968 although British cinemagoers had to wait until January 1970 and quickly moved into legend, as did this story from the director:

I was in the back of the Mustang and Steve was going about 120mph. We came to the last downhill section and when we got to the top of the hill Steve was still going pretty fast. I tapped him on the shoulder and said: “We can slow down now, we're almost out of film.”  Steve said very calmly: “We can't. There aren't any brakes”.

McQueen managed to avoid disaster by steering the Ford onto an incline and in the words of Peter Yates, ‘If it was anyone else, we might not have made it. Steve was a great driver’.

Hagerty in the US has just unearthed one of the original Bullitt Mustangs, a car that Steve McQueen tried, and failed, to buy back in the late 1970s. Read the full story here.