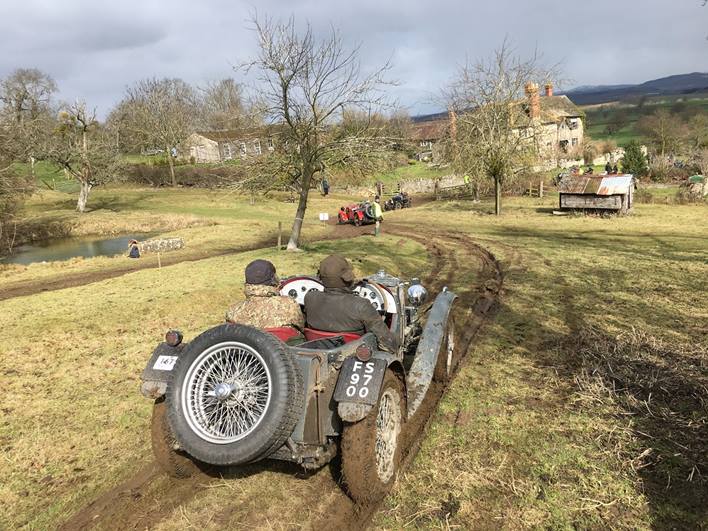 “Welcome to the secret world of the Vintage Sports Car Club,” begins the YouTube video that hooked us into coming over from the United States to take part in a VSCC trial. The dulcet accent of its presenter, actress and vintage trials enthusiast Harriet Collings, continues: “This is the story of fast cars, of mud, of competition, and of true British eccentricity at its best.”

And what follows in this video is, to American eyes, pretty dang popcorn-on-a-popsicle-stick eccentric. What look to be valuable motorised antiques are being mercilessly pummeled up rutted tracks and through muddy pastures as their engines wail piteously, their tires smoke horribly, and their occupants bounce in the seats as though experiencing some sort of violent epileptic attack. It’s as if the Beaulieu National Motor Museum and Broadmoor have decided to team up for a day in the country. And it’s as far from NASCAR racing as Shakespeare’s sonnets are from the collected works of Garth Brooks.

We had to experience it ourselves, so one full year after first laying eyes on the YouTube video, we were there, a two-man Hagerty USA team standing ankle deep in mud in a pasture in rural Herefordshire, watching a local put his finger up the tailpipe of our 85-year-old Austin 7 as if giving a rectal exam to a Holstein. He pulled it out, showed us the water on it, and declared that we needed to change the head gasket. There. Now. Just as it was starting to snow.

A few days previously we had experienced more English eccentricity at Bicester Heritage, the converted RAF bomber training airbase north of Oxford that is now a classic car center for events, restoration and storage. We visited several of the 35 specialised companies that have made their home there and saw everything from a D-Type Jag to a 427 Cobra to a 1929 Bentley 4 1/12 Litre being worked on, as well as some of the 300 cars in storage in a huge climate-controlled hangar that has a ten-foot-thick concrete floor and an 11-metre-high ceiling.

And, thanks to dealer Robert Glover, we got a ride around Bicester’s track in a yowling 1929 Alfa 6C 1750 Super Sports soon headed to the Mille Miglia. Glover specialises in pre-war sports and specials and was one of Bicester Heritage’s early tenants, moving into a restored building in the airbase’s old motorpool yard soon after it opened. Seeing the site for the first time was like “finding an old barn-find car,” Glover told me. “Everything was boarded up, there was graffiti everywhere. It didn’t look great but you could see what was underneath was important. You just needed to bring it back to life.”

The fact that five years ago, 348 acres of prime real estate escaped the housing developers’ clutches to become an old-car oasis set in such a historic locale is unfathomable in America, where even the great Riverside Raceway was eagerly ploughed over to build a shopping mall. But fortunately Great Britain treasures its history more than most cultures, and so, from the Yankee perspective, thank god for British eccentricity. We will be back for Bicester’s largest event, the 3000-car Flywheel in June, because such experiences are worth traveling great distances for.

Back in that Herefordshire sheep paddock, with the snow sheeting down, the wind blowing 20 mph, we did change that head gasket. We had the much needed assistance from Jeremy Brewster, the car’s seller and owner of a 1930 Lea Francis trials car as well as Brewster Mudie Ltd., a well-respected classics garage in Stoke Prior. It almost worked; with Jeremy’s help we also rewired the distributor and blew dirt out of the carb (ultimately, that was the real problem) finally returning our Austin 7 back to health. While our tiny red Ulster replica was ridiculously charming, with its jaunty side-mount spare and over-slung exhaust pipe, it lacked an identifier that would make it ours. Something American, but also period contemporary, seemed called for, so we settled on the squadron mascot of the Lafayette Escadrille, the all-volunteer band of American World War I pilots whose planes bore the image of a screaming antive American in full-feathered head dress. Henceforth, our Austin became known simply as “The Chief.”

Even with just three hills completed so far, the cold mud stuck to our outerwear had been well earned. At our starting hill, the dreaded Dean’s Place, The Chief had slithered through the deep ooze of the sandstone quarry like a marsh snake before losing grip on a section so steep that a new Jeep Wrangler Rubicon would have struggled. At ancient Chandos Manor—re-built in 1554, according to owner Robert White and his wife Ali, who lay out a spread of tea and unbelievably delicious Millionaire Short Bread for the trial trolls to munch on while waiting—the run up the hill was perfect until the rookie pilot (me) hit a boundary marker right before the stop box. Long and steep Marcle Hill would have been easy if the Austin’s tiny 747-cc engine hadn’t shown its first signs of trouble there. After repairs, the Hyde Halt and Foxhalls—to an American, the hill names, Pelham’s Penyard, Sipping Cider, Jim’s Joker, James’ Jolly, are so fabulously British—were surmounted with full points earned, but by then it was 5:30 pm, quitting time.

Overnight, along with most of western Britain, four inches of snow settled on The Chief as it slept in Ledbury’s market square. The next day the organisers ended the 2018 Herefordshire Trial prematurely in the interest of safety, but as The Chief went in for its two consecutive car washings plus a good chassis oiling before storage, we were satisfied that we had indeed experienced British eccentricity at its most glorious.