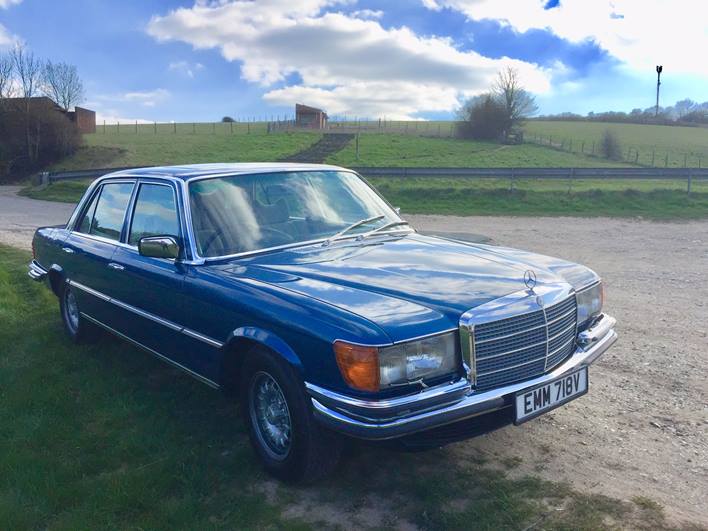 As a car-crazy kid, rather than squander my meagre weekly pocket money on frivolous treats such as Curly Wurly bars or The Beano, I used to buy Motor magazine every Wednesday to keep up to speed with the latest automotive news and trends.

As a proud young English lad, I naturally waved the Union flag for some of the great British cars we produced at the time: world-beating models such as the Range Rover, the Aston Martin V8, Mini, Lotus Esprit, Jaguar XJ12 and the Bristol 411. I turned a blind eye to what I then saw as ‘lesser’ contemporary UK-made machines such as the Morris Marina, Hillman Avenger and Reliant Robin.

The ultimate British motor vehicle of course was built by Rolls-Royce; globally regarded as the maker of the ‘Best Car in the World.’ As an enthusiastic and patriotic boy, you can imagine my surprise - tinged with a degree of disappointment - when the cover of my favorite weekly motoring magazine declared that the latest Rolls-Royce Silver Shadow had finally met its match in the form of the newly-released 6.9-litre version of the Mercedes-Benz 450 SEL.

The ultimate in Teutonic engineering and luxury, the first in a long line of S-Class models (which still exists today in its sixth-generation form at the helm of the extensive Mercedes-Benz range) was an instant success, despite the mid-1970s fuel crisis hurting sales of large (and thirsty) prestige cars overall. The Mercedes W116 enjoyed a lengthy initial waiting list, and almost 475,000 examples found buyers the world over during the first S-Class model’s eight-year production run; not bad for an expensive range-topping saloon.

The W116’s impressive V8 M117 engine - Mercedes-Benz’s first post-war eight-cylinder motor – powered the 350/450 SE and extended-wheelbase SEL models, which were supplemented by the more affordable in-line six ‘base’ 280 S. These were joined in 1975 by Europe’s largest capacity production V8 engine at the time, the new high-performance, special order-only 450 SEL 6.9. Exclusively available in the long-wheelbase configuration, the 6.9 V8 was showered with praise from launch, the model immediately challenging Rolls-Royce to the prestigious title of the ‘Best Car in the World.’

Having driven many Rolls-Royce Silver Shadows over the years, the chance to get behind the wheel of an immaculate Mercedes-Benz 450 SEL 6.9 recently was too good an opportunity to miss.

Opening the S-Class’s substantial Swiss vault-like drivers’ door, you are instantly reminded that you are entering a serious, over-engineered German luxury saloon. Sure, the Mercedes might lack the visual and nasal olde-English charm of the Silver Shadow’s traditional Gentleman’s Club wood and leather furnishings, but its large, inviting armchair seats and functional, airy interior have a certain appeal.

Once settled behind the Merc’s titanic steering wheel, a quick scan of the S-Class’s cabin reveals a functional but highly efficient interior, with thick, padded PVC fittings (for improved passenger safety) contrasting with thin windscreen A-pillars, light and generous glazing, plus large, logical and clear instrumentation.

Firing the Mercedes-Benz up, the 6.9 V8 quickly settles into a smooth and distant thrum. Once the S-Class’ automatic lever has been zig-zagged into Drive and old-fashioned lower dash-mounted ‘twist-and-turn’ handbrake released (a trademark Mercedes feature of the time), a gentle prod of the accelerator pedal briskly launches the 6.9 at the scenery.

Despite its wide girth and enormous steering wheel, the 6.9 instantly feels at home and shrinks around you on the narrow country roads of the Chilterns, helped by the car’s excellent all-round visibility and traditional three-pointed star ‘gun sight’ emblem perched at the end of the far-flung bonnet.

On wider main roads, the 450 SEL feels instantly at home, more than able to keep (and exceed) the pace of modern traffic, with the mighty Mercedes responding with enthusiasm when the accelerator is pressed; the driver rewarded with a reassuring and refined distant rumble from the powerful 6.9-litre V8. Perhaps this is the reason why many Grand Prix drivers in the late 1970s – including James Hunt and Emerson Fittipaldi – used 450 SEL 6.9s as their personal vehicle of choice in period.

On the move, the 6.9’s power steering is a little vague straight ahead, but it’s nicely weighted and communicative most of the time, especially when compared to the overly-light thin rimmed twirling of a contemporary Rolls-Royce. The Merc’s ride quality is also superior to that of the Silver Shadow, with ruts and bumps confidently taken in their stride (helped in part by the 6.9’s standard Citroen-style rear self-levelling hydropneumatic air suspension) and body control is impressively neutral, especially compared with the more lumbering Rolls.

The W116-series S-Class was the first European production car to pioneer ABS anti-lock braking, an option that was fitted to the late 6.9 that we drove, retardation in the Mercedes being as efficient and reassuring as that of a typical modern prestige saloon.

More than 40 years on, the first-generation Mercedes-Benz S-Class still has the capacity to impress. It is refined, comfortable, unfussed and more than capable to coping with today’s more demanding driving conditions. The S-Class’ very Germanic engineering and efficiency still shine through, almost half-a-century after model’s original launch.

So, would I take the Merc or the Silver Shadow? I’m afraid, for all its engineering efficiency, I’d still choose the Rolls-Royce. What the Shadow lacks in dynamics, it more than makes up for in character and charm, making you feel special and exuding a unique sense of occasion. The 6.9’s functional but ‘cold’ interior is leagues behind the Silver Shadow’s cosseting hand-crafted walnut, leather and plushily carpeted cabin space. Spending time with the impressive and imposing 450 SEL 6.9, however, was a rare and rewarding experience, unrivalled by few other luxury classics of the 1970s. If only it had more of the Silver Shadow’s grace…