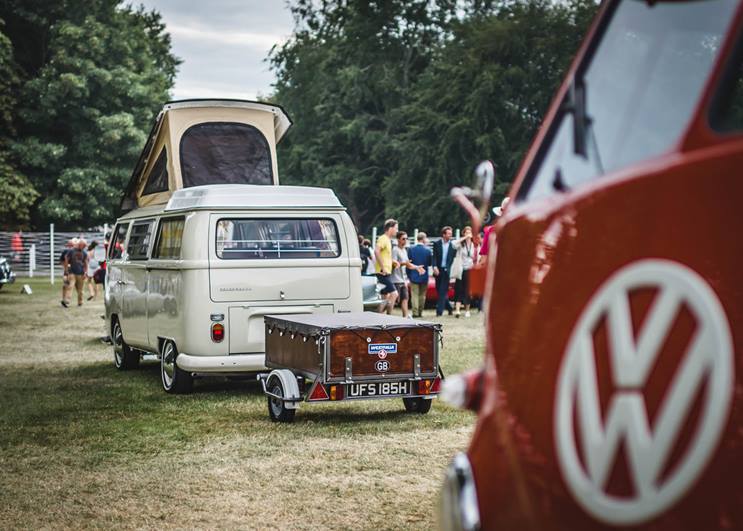 A VW Type 2’s Journey from a well-loved family classic to the lawns of Goodwood.

‘Your VW is in good condition, isn’t it?’ Gary asked.

I hesitated before I replied. Gary is one of the people who find cars to take part in various Goodwood events, so you never know quite what he’s thinking.

‘Yes, and it’s actually quite a rare model.’

Ten minutes later, I had explained that ‘Bessie’ (as she’s called) is a rare right-hand drive 1970 Volkswagen Type 2 Westfalia Campmobile, one of the official camper conversions offered by Volkswagen. She’s what’s known as an ‘Early Bay’, one of the first series of Type 2 vans with the wraparound ‘bay window’ windscreen which replaced the split screen (‘splittie’) in 1968. She had a great story: part of Volkswagen’s European Delivery Programme, she was picked up from the factory in 1970, driven around Europe, then shipped by VW back to the first owner’s home country. The stickers from that first trip are still displayed proudly on the ply interior headlining, showing a route that took in the Greek Islands, Italy, Italy, France, and even Spain.

I showed Gary some photos on my phone. He seemed impressed.

‘Do you have the original wheels?’ he asked.

A few minutes later, Gary had informally asked me to keep the first weekend in July free. This year is the 70th anniversary of the Volkswagen Type 2, and there was a plan for the Cartier Style et Luxe to include a class of this model. Bessie may be considered, Gary told me.

Now, when I said Bessie was in good condition, I probably need to qualify that. She’s nearly 50 years old and does a great job of moving kids, buckets, spades, bodyboards and lots of camping paraphernalia to the beach and back. In this respect, she was in amazing condition. In terms of a world-class concours though, maybe there was a bit of work to do. That night, I rang my friend Martin Buckrell of HM Bodyworx in Dorset. I had been meaning to have her few rust patches addressed, and have her colour changed back to the original Pearl White, an almost putty-coloured tone rather than the bright white she had been sprayed at some point in her life. A few weeks later, I’d stripped out her Westfalia interior, all but the driver’s seat, lights, trim and anything else I could easily remove. Everything was bagged and boxed, and Bessie was trailered down to Martin. It was the beginning of April; July seemed a lifetime away.

A few days later, my phone pinged. Martin had sent some photos; it wasn’t pretty. A quick grind of the nearside sill exposed a gaping rusty hole. The nose, which I thought was relatively solid, had a 2cm layer of filler, a substance that generously covered the majority of the van. Both doors were rotten, as was the rear offside sill.

By the end of the month, Bessie was down to bare metal and the true extent of her harsh life was obvious to see. Almost every panel showed evidence of repair. I visited and talked through the project with Martin; he asked me when was the latest I could have her back.

‘It’s a big job, mate’ he said with a worried look. I thought he was slightly overreacting: we still had a couple of months left. How hard could it be? Ha, the blind optimism of the totally naïve.

Back at home, I set about cleaning the parts I had, and buying replacements if they weren’t reparable. By mid-May, I was feeling chipper: this will be easy. Bessie will come back in late June, I’ll put the interior back in a few days later, then it’s off to Goodwood. Buoyed by my good spirits, that night I was searching for parts on eBay when I happened upon an original Westfalia Essen trailer of the period that would suit Bessie. Unrestored, it was just over £300 and not too far from me. I bought it with very little thought.

I’ve been around classic vehicles now for thirty years, and I probably should have learnt by now that every ‘easy’ restoration is anything but. My wife’s a bit more realistic about these things, and when I told her I had a trailer to restore, she nearly flipped her lid. Ironically, on this occasion, I was right: the trailer came apart very easily, most of the spare parts were found for very little money on eBay, and the result – with a home paint job and newly- lacquered woodwork – is something I’m very proud of.

With a few weeks to go, all seemed to be going smoothly. By a Herculean effort, Martin finished on time in mid-June. He had put in a total of 378 hours by the time I picked it up, and with new window seals and proper panel gaps, she looked superb. The next day, Bessie was back on my drive; I now had ten days to get her ready. Plenty of time, or so I thought. A quick phone call to the Hagerty office increased the insured value of the van just in case, and I was off.

I started the process of putting her back together but absolutely everything took ages. Wiring connectors came off in my hand and had to be replaced. Screw holes took five goes to line up properly. Door seals needed to be trimmed and re-glued, then trimmed and re-glued again. Some of the parts I’d ordered were wrong and had to be returned and the correct ones bought. I nearly dropped the sliding door when trying to fit the seal, and despite bagging all the parts, I managed to mislay the seat belt bolts.

Then came the wheels. Now, at some point in her life, Bessie had been fitted with Late Bay hubs to give her front disc brakes. All good so far, but I wanted the look of the original 5 x 205 steel wheels so I bought adaptor plates from the same place I bought the wheels. They assured me they would fit with standard bolts. They didn’t. Then I tried to test fit the new hubcaps I’d bought, and two of the clips on my new wheels broke off.

At this point, with just days to go, I decided I needed help. I remembered meeting a guy called Simon at Specialist Motorcaravan Services near Chichester. Simon, it turned out, was my knight in shining armour. He fitted the wheels (cutting the bolts down a fraction so they didn’t foul) then replaced the duff hubcap clips. Then he told me the hubcaps were the wrong ones, and I had to make a quick dash to VW Heritage to collect a new set.

On the Tuesday of Festival of Speed week, I went to collect the bus. Driving home, a hubcap fell off, then on my drive that night, another. The sprung steel clips on my new wheels were anything but.

Simon came to my rescue again. On the way to Goodwood I drove in to his workshop and he quickly removed each of the wheels, riveted new clips, replaced the wheels and fitted the hubcaps. Proudly, I drove the last few miles to Goodwood, where I parked her up alongside an amazing collection of Zagatos, Bentleys and the most stunning Voisins.

The weekend is still a bit of a blur, like a dream that you wake up from and wonder if it was real. We were invited to the ball where we found ourselves on the table next to Mika Hakkinen; later we found ourselves watching fireworks stood next to Princess Beatrice. The Cartier team were amazing, especially the group of enthusiasts who carefully cleaned our vehicles every few hours.

For me, the best thing about the weekend was standing by the bus and listening to people talk about Bessie. For some, she brought back memories of their own campers, for others she was something that they just enjoyed looking at.

And she was great to look at, even if I do say so myself. The Pearl White looked stunning in the sunshine, and all the other colours – from the check curtains to the wood panel interior – suddenly made sense. I’d decked her out with a few ‘props’ from 1970 including a copy of the Radio Times, an edition of The Times Driving supplement (for whom I used to write), and some toys from my childhood. She did what she does best – she brought joy, which is exactly what Volkswagen Type 2s do best.

On Sunday morning, it was time for the judging. The Volkswagen class was inspected by the Queen’s nephew the Earl of Snowdon (A.K.A. David Linley), designer Marc Newson and model Richard Biedul. They were all fascinated to hear about the Westfalia interior, and how so much was packed into such a small space in such style.

Bessie didn’t win a concours prize; that honour went to a lovely blue splittie single cab. After being initially a bit upset, I quickly came to terms with it; a win would have caused us to think long and hard about how she was used in the future, whether trips to the beach were really the best thing for her, and whether living on the drive under a tarpaulin was appropriate for a concours winner. As it is, we have fantastic memories of a great weekend, and she’s full of camping gear ready to go off and fulfil her original purpose some 49 years after she was built. There aren’t many vehicles that can say that, and there aren’t many that can claim to have had a Royal visit, but Bessie has always been a bit special.