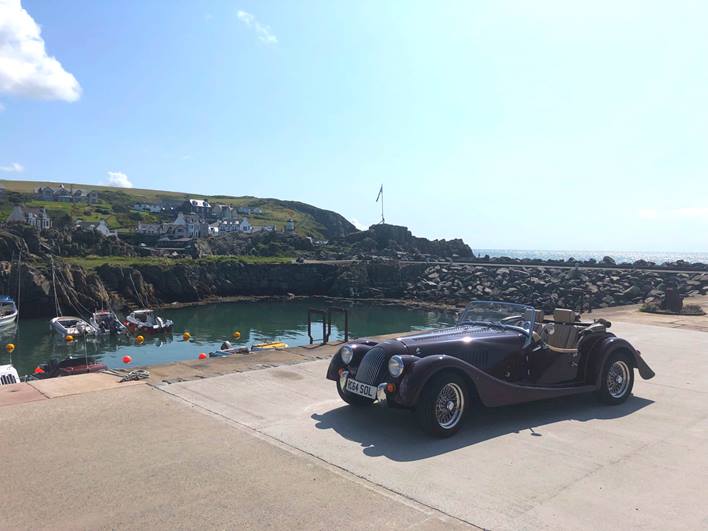 Morgan Plus 4 at Portpatrick

People who love Morgans are extremists. There, I’ve said it, right off the bat. You never find someone who owns a Morgan who just likes it; they all eulogise about their car, vigorously defending those who dare suggest that the Morgan Motor Company’s approach to car building might be, well, a little bit dated? Morgan owners LOVE Morgans. Full stop.

I’ll admit right now that I don’t fall into that category. I’ve always found them a little bit hard to understand: not a classic, but also not making the most of modern technology. It’s like someone refusing to listen to DAB or even FM radio, insisting that the crackly, drifting-in-and-out of Long Wave is best. They’re people I’d give a wide berth to.

So, when I was thrown the keys of my friend Richard Copeland’s 2014 Morgan Plus 4 and told to go and enjoy myself, I was faced with a bit of a conundrum. On the one hand I was in a wonderful part of the world – Richard’s Sands of Luce holiday park in the beautiful Dumfries and Galloway - the sun was shining and I was being offered the chance to try a car I’ve never driven before, something I love doing. On the other, it was a Morgan. I had a lot of prejudice to overcome.

I decided to wipe the slate clean: I approached the car as if it was the first time I’d seen the model. The design is the automotive equivalent of the Guardian or maybe the Daily Mail: it’s been around for a long time, and you know exactly what to expect. Climbing inside though, things started to surprise me. The tan leather seats gave a great combination of comfort and stability, and the driving position was excellent. The 1,999cc straight-four DOHC Ford GDI engine fired easily and sat burbling happily as I ran my hands over the MotoLita steering wheel. After a brief altercation with the hand brake (note: don’t push the knob as you try to release it, as it will have the opposite effect) the car clicked easily into gear and we set off.

Some cars make you work for them; I recently hired a modern Fiat 500 and it took about an hour of driving before I felt totally confident in it. The Morgan though greeted me like an old friend, and I quickly felt at ease in its presence. Out onto the winding, empty Scottish B-roads I went, and before long I decided to see what it could do. The Ford engine’s 154bhp gave more than enough power, with great throttle response and a lovely noise when revved. The gearbox was a real highlight: since 2012, the Plus 4 has been fitted with a very competent Mazda five-speed manual which gives a quick and precise gear change. Its turned alloy gear knob feels great in the hand too.

Out onto the flowing A77 towards the picturesque village of Portpatrick, the Morgan really came into its own, and I found myself grinning as I decided to push it a little harder. Then I came to a tighter corner.

The rest of the Morgans’s mechanical parts are so competent that I can’t believe that the steering on this car is set up as standard, and on my return I suggested to Richard he should get it checked. At slow speeds, there’s almost a quarter of a turn of the steering wheel before the wheels follow suit. It’s enough to dent the driving confidence that the car otherwise inspires.

So, did I become a convert to the Morgan cause? Not really, but I see where they’re coming from. Despite the effort that has gone in to applying modern engine and running gear, it’s still a chassis based on a pre-war design, with all the prodigious scuttle shake that brings to the party. The speedo is still on the wrong side of the cockpit and the tacho is hidden away behind the driver’s left hand. Luggage space is not great, and the ‘Easy Up’ hood is still a bit of a fiddle to get right. With prices starting at £44,106 for a new one, I’d pay a couple of grand extra and buy a Porsche 718 Boxster or save myself nearly £20k and find a new-second-hand Abarth 124. If I wanted something classic, I’d find a great Alfa Romeo Duetto for the same price which has none of the Morgan’s compromises.

But – and this is a big but – I now understand that none of these cars would give Richard what he needs. He’s been in love with Morgans since the 1970s when, as a 16-year-old, he first put down a deposit on one. That itch was never scratched – in his words, ‘Marriage and a mortgage saw to that,’ – and it took him until his sixties to buy the car he’s lusted after for most of his life. He now wants something that combines classic styling with reliability and enough performance to raise the heart rate by just the right amount, characteristics that his Plus 4 delivers in spades. He’s toured all round Europe, Scotland and Ireland in the car with his wife and hasn’t seen the inside of a breakdown truck once, plus he averaged over 40 miles-per-gallon. You couldn’t do that in a Duetto.