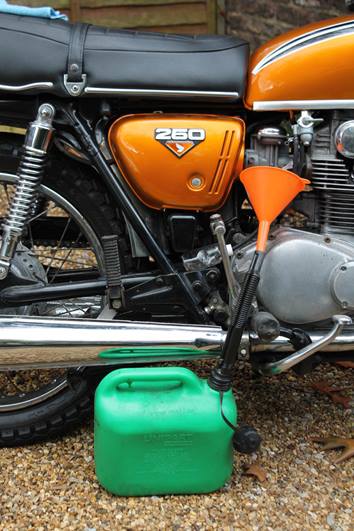 My first bike was a 1976 Yamaha DT100 trail bike. Mike Hailwood would have sat on it, but white flared trousers were the fashion at the time.

Sports Motor Cycles in Manchester gave it to my dad in 1978. It was a significant year. SMC ran the Ducatis Mike Hailwood raced on his TT return. My dad, Ted Macauley, was Mike's long-term friend and manager, and Mike was a regular visitor to our home.

Not that I cared. I was 17. That DT was made for wheelies, having its neck wrung chasing my mates on their 125s, trying to take it where no trail bike had been before. That it survived beyond the end of every day I rode it was down to something between a miracle and Yamaha's build quality of the time.

Mike was arriving with my dad one afternoon when I returned from an off-roading adventure. White flares and filthy DT. Er, no.

I rode it to school when I was in the sixth form, the caked mud both a talking point about my weekend off-roading, and when winter proved just too numbingly cold for my make-do riding gear, I stored it.

Well, when I say "stored it", I rode it into our damp garage, shut the door, and didn't look at it for four months.

And when I did, it changed my life - and respect for machinery.

The word "cool" was in its first era of being fashionable. And I thought my DT looked cool when it was covered in mud from forays up into the Pennines. So I'd left it that way.

But come the following Spring, and my mind turned to my DT, I went to retrieve it from the garage and the shock was almost immediate.

Almost, because while it started second kick, I couldn't move it. Everything that could seize up had done so - clutch, brakes, even some switches. The chain had become a solid steel bar. When I did eventually get it moving the tyres were out of shape, and the battery wasn't holding charge.

After the first bump in the road, one of the fork seals failed.

Worse than having to find the money to fix it all was that I couldn't ride it. When my mates took off on their bikes, I felt like one of those Disney cartoon character birds wistfully watching as the rest of the flock disappeared towards the horizon and imagined unseen adventures.

Dirt and damp are bike killers. It won't happen to yours? Yes, it will. Wash it, dry it, leave it out in the sun, run it to get it warm, even take a hair dryer to it. Make sure it's bone dry.

Depending upon the value of your bike or your relationship, find somewhere dry to store it. Kitchen, hall or dining room ideal. Or a dry garage. Maybe a self-storage unit. Or move to California.

Modern-day petrol has some real weird stuff in it. It can damage older plastics and rubber in the fuel system, although modern replacement parts are more resilient. Consider draining the system. However, topping up the tank will stave off rust inside.

Bright bits don't like winter. Original chrome is priceless. Pattern chrome can be either modern-day resilient (we call it plastic), or rust in a heartbeat. Avoiding brake discs, spray any bits that can corrode with WD40.

It's a bit Storage Extremist, but some will recommend draining all fluids - engine oil and hydraulic.

Targeted blasts of WD40 to moving part joints help avoid stuff sticking, although older springy-typy stuff might benefit from being unhooked or loosened.

Over-inflate to protect the shape and move your bike regularly. Better still, get it off the ground taking weight off the tyres.

Creatures find silencers comfortable places to be, and some air filters make great winter residences for rodents. If there's a nook or a cranny that'll be attractive as housing, then seal it. And watch out for hibernating queen wasps....

Ideally, your bike shouldn't be put away and forgotten. Start it every couple of weeks and properly warm it, ensuring there are no residents in the silencers.

For me, removal is pointless. Trickle charge batteries with a quality piece of kit.

Finally, cover it. At one extreme it's protection from dirt and means WD40-ed shiny bits don't absorb grime, at the other it protects from indeterminate-origin drops of stuff that might be anything from a trapped creature poo, through to corrosive drips of whatever lies on the other side of your plasterboard ceiling.

There: now you're safe to put on your white flares.